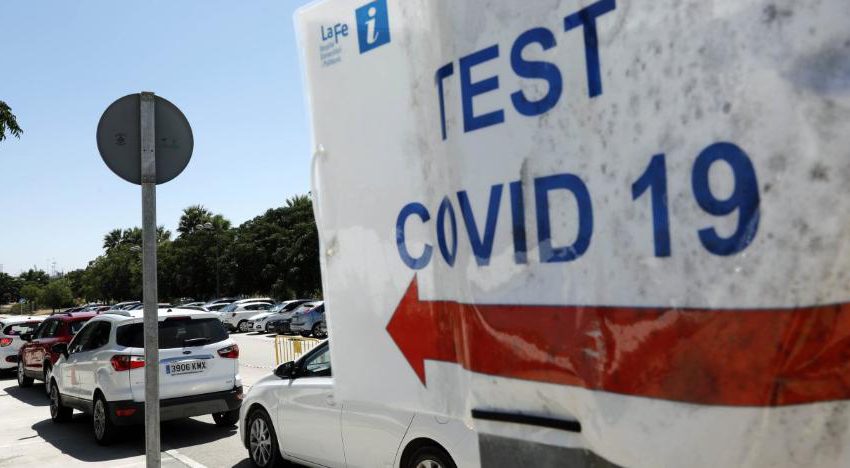 Valencia. The coronavirus has opened the doors of Father Jofré Hospital. Yesterday two other workers at the health centre were confirmed positive and on Monday a nonagenarian patient who has been admitted for five months was confirmed positive. With these three new cases, there are now eight people infected with Covid-19 in this health facility, which has begun to carry out massive PCR tests on employees and hospitalised patients, according to medical sources.

It all started the first week of August, when a nurse joined a summer replacement. The young man was given a rapid coronavirus test but also underwent a PCR test. The rapid test was negative – in this case a false negative, as was later learned – and he was told that he was starting the night shift that same day.

But the surprise came when, 24 hours after having undergone PCR and after having covered the night shift as instructed, and after having been associated with colleagues and patients, the result of the sample indicated that he was positive for Covid-19, even though he had no symptoms.

The woman, asymptomatic, knew she was infected after a PCR so she could go to a nursing home

That night the asymptomatic nurse, who according to his colleagues did a good job on his debut, kept in touch with a security guard, another nurse and a nurse’s aide. All of them were infected. And the security guard was blamed for his coronavirus infection on a sister who had previously been infected.

When the positive PCR test came back, the substitute nurse was isolated and has not yet returned to work.

Last week there were already five people infected with coronavirus in this health centre, all of them hospital workers, counting the first-time health worker.

In spite of this, the Padre Jofré hospital is not recorded as an outbreak among the 21 that until now were accumulated in the Comunitat Valenciana, according to the head of the Ministry of Health, Ana Barceló, last Monday.

And it was precisely on that Monday that the coronavirus ceased to be the sole property of the employees of the aforementioned hospital, which serves especially the elderly and psychiatric patients, and went on to infect a woman who had been hospitalized since last April.

It is a nonagenarian, hospitalized for five months, which was on the floor 1 C, intended for palliatives, internal medicine. This lady was about to be discharged and sent to a nursing home.

But now, in order to become a resident of an asylum, the rules have changed and indicate that you have to take the PCR test and it will come out negative. The aim is to prevent by all means the coronavirus from entering the nursing homes, given the devastating results produced by the Covid-19 among the tenants of these facilities during the months of March to May. But this venerable nonagenarian had a positive test result. She is infected and asymptomatic.

The patient could not be transferred to the residence where she had planned to go and she continues to be admitted to Father Jofré. With her, there were already six people infected by coronavirus related to the hospital.

If that happened on Monday, yesterday two more positives were revealed: a nurse on the isa floor where the patient is a warden who has had contact with the patient and others infected. These two new cases bring the number of infections to eight: seven employees and one patient.

Last week, a number of health workers in that hospital called on management to start PCR tests on all workers and people who are in the hospital. The response, according to the health sources consulted, was to go to the primary health care centres and have the tests carried out there. This left the door open for coronavirus infections not to be directly linked to the hospital, sources close to employees at the centre said. Those with symptoms were tested.

But if that demand at the time did not have any effect, after Monday’s positive result in one patient and the two detected in yesterday’s show, with eight cases already behind them, tests have begun to be carried out massively on doctors, nurses, assistants and other hospital workers, as well as on the people admitted to this centre.