The issue of corruption among politicians is consistently in the headlines in Spain, and is one of the reasons 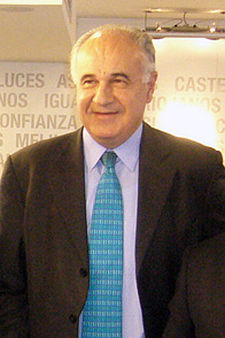 behind the general discontent with the country’s ruling classes which led to traditional voting patterns being broken in the European elections at the weekend.

The latest politician to hit the headlines this week is Rafael Blasco, a former regional minister in the government of the Comunitat Valenciana, who on Wednesday was sentenced to eight years in prison and barred for twenty years from holding public office for offences committed when the regional president was Francisco Camps, between 2003 and 2011.

Sr Blasco was among nine people found guilty of diverting funds intended for development projects in Latin America, Asia and Africa into their own pockets, six of them belonging to the regional ministry for Solidarity, with the sentences dished out totalling 43 years in prison.

Now aged 69, Sr Blasco occupied central roles in Valencia’s regional political scene for the best part of three decades, and he is likely to appeal against the sentence. He is represented by lawyer Javier Boix, who also defended Sr Camps and the former president of the province of Castellón Carlos Fabra, and although he will not be imprisoned pending appeal there is no possibility of his prison term being suspended in the same way as the three-year punishment to which Pedro Ángel Hernández Mateo, the former Mayor of Torrevieja, was sentenced.

Among the misdemeanours of which Sr Blasco has been found guilty is the repeated sacking of employees who failed to approve the subsidies he demanded, some of whom gave evidence in the trial, and he even called a departmental meeting in which he demanded that all staff trust blindly in his decisions.
Four of those found guilty have been ordered to return 1.7 million euros to the regional government, relating to money which in theory was set aside for aid projects in Nicaragua. Instead, it was spent on apartments and garage spaces in Valencia.

Other investigations have centred on the five million euros which Sr Camps approved for a hospital in Haiti after the 2010 earthquake.

After receiving the sentence Sr Blasco resigned from his last remaining position in the Spanish parliament, following a career in which he has been affiliated to various different parties, including the Communist Party and both main current political parties, PP and PSOE. He left the PP last June, having been expelled from the PSOE 25 years ago when he was suspected of having accepted bribes. In relation to these offences he was found guilty in 1991, but the sentenced was later overturned when telephone bugging evidence was rejected on appeal.

At this point he joined the PP, but the current regional president Alberto Fabra relieved him of his post as party spokesman in the regional parliament in 2012 and since then the government itself has requested that he be sentenced to eleven years in jail.

It seems incredible to those from other countries that he only finally resigned yesterday, but in Spain the idea that politicians should relinquish their posts simply because they have been shown to be criminals is not one which appears to be widely held.
At least, that is, among politicians themselves: last Sunday the voters showed that they have other ideas…
Image: Wikicommons