The 2015 Arenal Sound music festival in Burriana, in the province of Castellón, will be remembered not only for the music and the festive atmosphere but also for the heavy storms which disrupted the first evening’s entertainment and caused havoc at the official campsites for the “Sounders”. 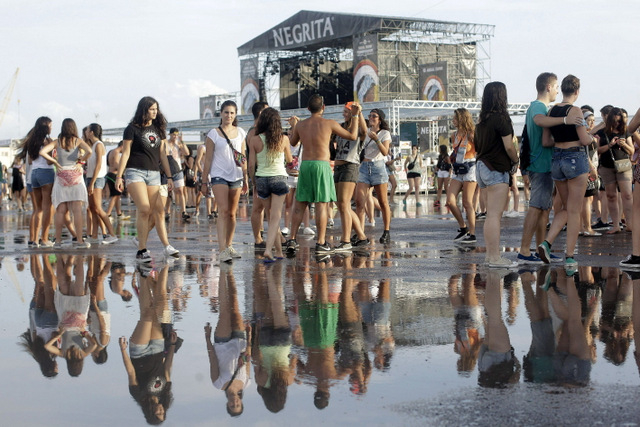 Between 800 and 1,000 people are reported to have been evacuated from the camping areas following torrential rainfall on Thursday night, and they have had to be relocated to the Llar Fallero and the Casa de la Cultura. Special buses were brought in to transfer them at approximately 3.30 in the morning, and the fire brigade had to begin pumping water out of the camping area.

The first rain fell at around 19.30 during the first performance of the festival, which featured Jero Romero, and although the music re-started after 20 minutes the appearance of Arenal Sound favourites La Pegatina was delayed. Later on, though¸ while British group Rudimental were on stage at 1.00, another downpour fell, creating large pools of water and causing power cuts.

This time the fans were asked to return to their campsites to ensure that their belongings were not lost in the flooding, but so bad was the situation that in some cases they were moved to other locations in the town. Elsewhere, garages and basements were flooded in the municipalities of Oropesa, Benicàssim, Alcossebre and Vinaròs, as well as in Burriana.

On Friday the province of Castellón remains on orange alert status for storms and heavy rain, but the Sounders will be hoping that Burriana escapes the deluge this time and that their tents and sleeping bags have time to dry out!

Like being back at Glastonbury for forgotten (best forgotten thinking about it!) festivals of mud and clogged up portaloos, those were the days!