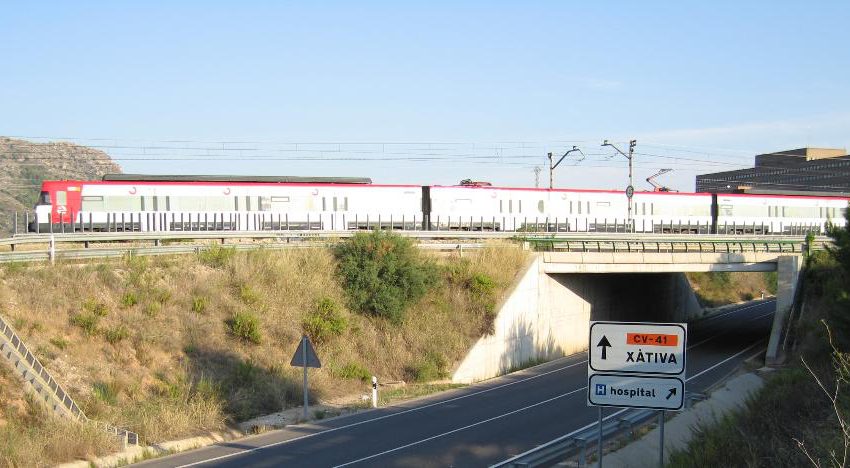 Adif plans to start a series of improvement works, from October 19th to November 30th, at different points of the Xàtiva-Alcoi line, which runs for nearly 64 kilometres.

The works, which represent an investment of approximately 700,000 euros, include the renovation and improvement of a tunnel between Xàtiva and El Genovés, the construction of a retaining wall of approximately 75 metres in a trench between kilometre points 5/400 and 5/500, and other operations of cleaning accounts and drainage works.

The objective is to increase the reliability parameters of the infrastructure, with the consequent benefit for the service, as explained by Adif in a press release.

Among the most significant works to be undertaken, it is worth mentioning the renovation and improvement of the tunnel on the Xàtiva-El Genovés route, located between Mount Penya Brúfol and the River Albaida, with a length of 250 metres, a height of 5.47 metres and a width of 6.4 metres.

In addition, gables will be reinforced with trusses and sprayed concrete, the brickwork of the vault will be treated and improvements will be made at various points to prevent leaks during periods of heavy rain. A 75-metre long wall will be built in a trench between kilometre points 5/400 and 5/500, between Xàtiva and El Genovés, which was affected by the heavy rains of the past Dana.

Other maintenance tasks will also be carried out along the line, such as gutter cleaning and track arming. In addition to this action, other investments in the line, included in the Valencia Community Commuter Plan, such as the works of new safety installations between Xàtiva and Alcoi, awarded for 7,076,110.1 euros, and the drafting of the track renewal projects in the Ontinyent-Alcoi section, with a budget of 568,344 euros, and Xàtiva-Ontinyent, tendered for 1,026,503 euros.

The Xàtiva-Alcoi line has a very sinuous layout due to orographic difficulties, with reduced radius curves and numerous tunnels, trenches and bridges. As for the altimetry, it has sections with steep slopes of up to 23 thousandths of a ramp.

Due to these works, rail transport on this line will be interrupted, so Renfe has established an alternative plan for road transport with the aim of reducing the impact on rail services and ensuring the mobility of passengers during the infrastructure works.

Complete information on timetables and frequencies is also available by calling 912 320 320, as well as on Renfe’s website www.renfe.com.

Regarding the Alternative Transport Plan, Renfe has confirmed to Ontinyent City Council that it will meet their demands. Thus, the bus will stop at the crossroads between Albaida and Almaig Avenues, instead of the train station.

The Councillor for Transport, Inma Ibáñez, explained that in the first instance “Renfe’s forecast was that the bus that would transport passengers from Xàtiva station would stop at Ontinyent train station, but we were very clear that it would be faster, More comfortable for the users and even more ecological than the bus stopping in the city centre, some explanations that have finally been heard and attended by the new person in charge of institutional relations of Renfe, the former delegate of the Government in the Valencian Community, Juan Carlos Fulgencio, whom we thank for his receptiveness”.