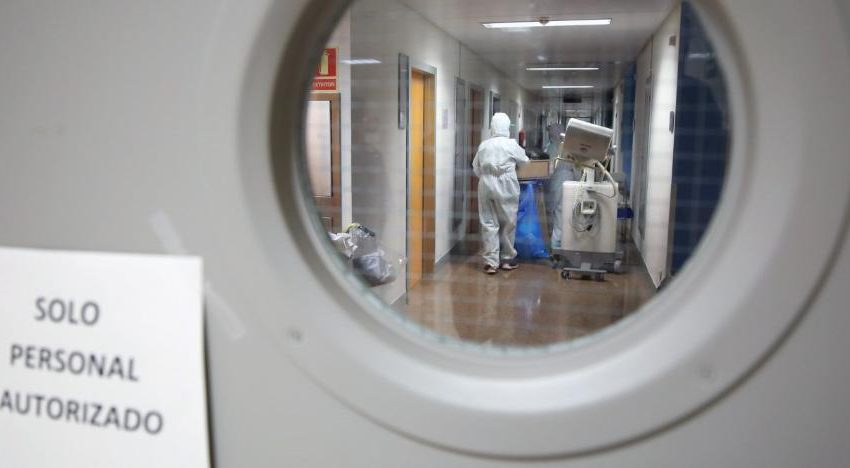 The knot on hospitals and health professionals continues to tighten every day, with the tenacity of a Malaysian drop. On the verge of collapse, with 4,143 admissions, 552 of them in the ICUsThis is an increase of 86 hospitalisations and 16 more people in serious condition, all of which is causing problems in many health centres.

To try to alleviate this situation, the Ministry of Health has confirmed that it is contacting hotel owners so that their rooms can be used both for patients who have to be isolated or suffer from mild cases of the disease or for health professionals who require it. In the course of the first wave, some hotels were already used for this purpose, so the Regional Ministry has taken up this option again in view of the figures.

At the Virgen de los Lirios Hospital in Alcoy, pressure “increases from one day to the next,” said workers consulted by LAS PROVINCIAS. They explained that there are 16 people admitted to the ICU “and the sick people keep coming in day after day”. This situation has forced the diversion of deliveries to Ontinyent hospital (35 kilometres away), unless it is imminent, and spaces such as the centre’s cafeteria are to be fitted out to accommodate beds with patients after the Maternity and Rehabilitation Unit has already been occupied. “We are desperate”, explained one worker: “Either they build us a field hospital or they allow us to use the facility in Barranquet de Soler”.

This building, initially built to house a centre for the mentally ill, was completed in 2019 and is now closed. The Ministry of Inclusive Policies, which is responsible for it, recalled that in the first wave of the pandemic “was offered to Health but rejected it as a resource. For this reason, Equality prepared it as CATE (Temporary Emergency Care Centre), which is a resource to meet the needs of the social sphere in a pandemic”. They added that they have “requests to re-enable the CATE. However, from the Department of Equality we are open and cooperative with the requests of Health. Especially at a time of high hospital pressure”. They said that the center has 40 beds that could be a relief for the Alcoy hospital.

Field hospitals are already beginning to play their role. The one in La Fe, in Valencia, already has 20 patients admitted while, together with the General de Castellón, it already has 11. The pediatric ward is receiving adults with other ailments.

From the Doctor Peset Hospital in Valencia, some professionals explained that 15 of the 16 ICU beds are occupied by Covid patients and new spaces are being prepared such as the Post-Anaesthesia Resuscitation Unit for non-Covid patients. In this centre, shortcomings such as the lack of monitors in spaces used by critical patients have been solved.

In the Hospital of Torrevieja, with the ICU full, have split up beds on floor zero, which houses Covid patientsand are receiving patients from Orihuela and Elche General.

With respect to other centres, the Hospital Universitario de la Ribera, in Alzira, is also suffering serious problems. Workers at the center said that there are 270 positives admitted, 35 of them in serious condition and in spaces such as the ICU itself and the area where people who have undergone surgery wake up. The referral of patients in the area has meant that only 10 of the 90 beds in the private hospital at Barraca d’Aigües Vives remain. Likewise, patients are also being referred from Alzira to 9 October, in Valencia.

From the Hospital of OrihuelaWith 20 Covid patients in the ICU, people with the virus are being referred to the Hospital de Alicante and not to Covid in private centres. They reported that there are “a lot of infected workers, some 135 on leave and 81 in quarantine of all categories”.

In the Marina BaixaWith 101 Covid patients on the floor, the situation is also serious with the creation of an eight-bed operating room ICU for non-Covid patients.

From the Marina Alta regretted that there have been 13 deaths in the last week.

From the General Hospital of Valencia, the professionals reported that the ICU, “with 45 patients, there is no more room”. They reported that there are also serious patients in resuscitation, operating rooms and the endoscopy room and there are even people “who have spent two days in a chair waiting to be admitted.