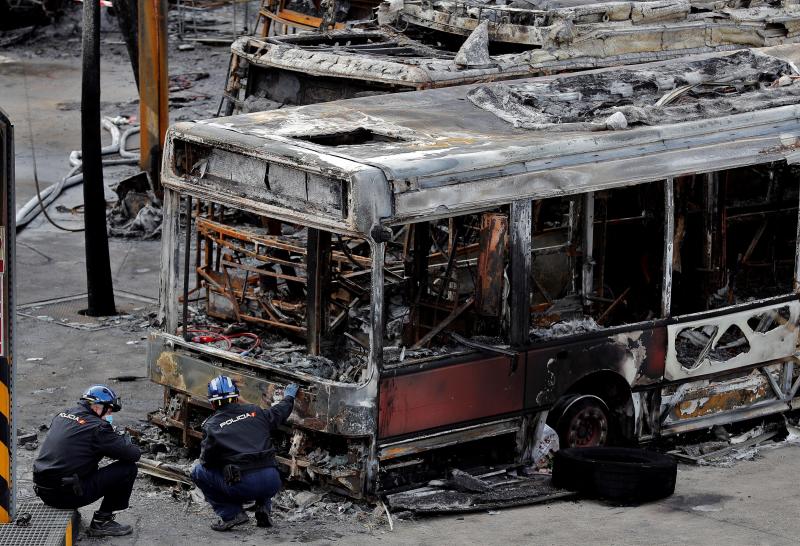 It is hard to imagine the hell that broke loose on Saturday in the San Isidro garages in the dreadful fire that destroyed 16 buses and damaged seven others. But it’s even harder to imagine the faces of the firefighters who arrived at the southern depot at 4:59 p.m. Saturday to meet when they connected the hoses to the garage water pumps that didn’t come out a drop. As you may have known in LAS PROVINCIAS, a failure in the hydrant network caused a significant delay in extinguishing the fire and a desperate call to the fire brigade: “Send the mother trucks, there’s no water here.”

Saturday 5th December. 4.44 p.m. The first call comes to the Western Firehouse. There’s a fire in the EMT garage. A heavy urban pump (BUP) with a full complement of firefighters is quickly moved to the scene. According to reliable sources, there is already a column of black smoke in the distance preparing the firefighters: the fire is more serious than they thought. The two initially affected buses are already burning and the firemen are preparing to attack the fire from two fronts, as usual. However, the unpleasant surprise comes when they connect the hoses to the fire hydrants and see that no water comes out. That’s why they ask for water trucks, since the BUP only has about 3,000 litres of water, which, with two hoses, can last for about 5 minutes of work against the fire.

“Send wet nurses, there’s no water here,” called for the first team of firemen to arrive in San Isidro

Sources familiar with the operation of the service say that Putting out a gas fire is relatively simple“Just pour a lot of water on it.” However, this lack of water in the first moments caused “a significant delay” in the extinction work, which was only undertaken with guarantees when reinforcements arrived: all the city’s firemen except for those from the Saler Park went to San Isidro. It was then that it was connected to the exterior hydrants of the garages and thanks to the company’s personnel, other outlets were located within the depots that were able to offer service.

The firemen helped, as the same sources explain, the EMT staff to move the buses. The newest ones get going faster, which is why the company’s mechanics and firemen were able to save them from the flames. The older ones are more difficult to move, so they were more affected by the fire. It is striking that they were buses that were very close to the end of their useful life and yet all of them had the bulkhead that separates the drivers from the passengers installed, unequivocal proof that they were ready to roll.

Grezzi talks about normal service but the management announces “problems”

The president of the EMT and Councillor for Mobility of the Valencia City Council, Giuseppe Grezzi, highlighted yesterday that the company has already recovered “the normalcy of the depots”. Yesterday one of the gas lines that were affected by the fire was repaired, “so that the gas buses can be loaded normally and guarantee their service,” said the mayor, who thanked “all EMT staff for the work done in the last hours to recover in record time after the incident on Saturday. “It was a hard blow, but thanks to everyone’s efforts the public service provided by EMT has not been affected at any time,” said Grezzi. However, according to an internal note sent to the drivers, the management of the company asks for patience because the fire “may cause some inconvenience in the internal operation”.

The mayor also thanked the work done by the police and firefighters “who, in coordination with the EMT staff, controlled the fire. Eloquently, the councillor added, in a note sent after this newspaper questioned the company about the failure of the hydrants, that the fire was controlled “with the help of the hydrants and fire pumps”.

“Forensic science is still investigating the causes of the fire. Now we have to wait for the professionals to investigate and draw their conclusions,” said Grezzi. The management of EMT met on Sunday with the technical and operations area staff to assess the damage and plan the service “with the aim of not affecting the users,” he said in a statement sent to the media.

On the request of the opposition for an extraordinary council, Grezzi confirmed that he will convene it. “We’re compiling all the technical reports,” he said. “In addition, I myself contacted the spokespersons of the municipal groups this weekend to pass on the information we had so far. A police investigation is underway, so I also ask for caution and responsibility from the councillors,” the councillor requested.

In any case, it was when reinforcements arrived that firefighters were able to throw the water lines into the working hydrants, both inside and outside the depot, and quell the flames, which had spread to nearby buses. The first hypothesis the National Police’s scientific police are working with is that one of the gas tanks on one of the buses exploded. According to sources familiar with the procedure, although it is simple, the extinction of such a fire is not without risk. One of them is what the technical specialists call a fire dart.

It is produced when the safety valve of the gas tank is released. This occurs when the internal pressure is too high. In this case, the gas is released and a highly flammable flare of up to 10-12 meters that can cause further fires in the vicinityas well as personal injuries to firefighters. Fortunately, on this occasion, there are no casualties, but there is a great deal of material damage.

The mayor of Valencia, Joan Ribó, said yesterday that there’s no news in the investigation, which is ongoing, and that there will be timely and transparent reporting of the findings of the technical reports. Although the opposition figures up to 6 million in damage to the company’s assets, the entity assures that the cost of the buses is much lower and that the security services of the garages had passed the relevant reviews, including the fire service.