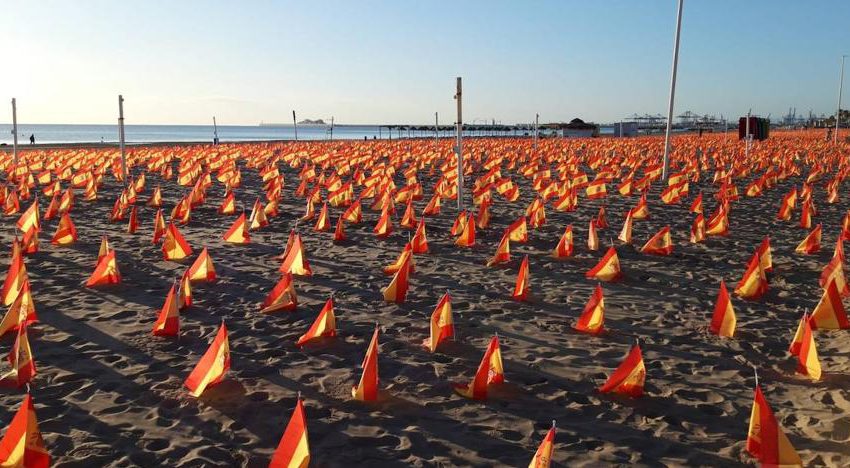 The beach of La Patacona has dawned this Sunday sown with thousands of flags of Spain (53,000 according to the promoters of the initiative) in tribute to the victims of the coronavirus in our country. The association Anvac (National Association of Victims and People Affected by Coronavirus) explains on social networks the reason for this symbolic act.

Under the label #NoSonFiguresSonPeople the association wanted to pay tribute to those who died during the Covid-19 pandemic in the Comunitat and ask for justice for those who lost their lives as a result of the virus. Until the Patacona beach hundreds of people have come to this tribute.

Among the events planned for this day of remembrance, it is foreseen that a minute’s silence in memory of the victims of the pandemic. Likewise, from 7 p.m. the flags that have been placed during the early hours of this Sunday by volunteers of the association will be collected.

“With the light of dawn we honor today in Valencia the memory of our victims. We continue to fight against oblivion. Dignity and justice”, said the association in a message published on Twitter.

Different groups and political leaders have shared images and videos of this action, such as the spokesperson of the Vox Parliamentary Group in Congress, Iván Espinosa de los Monteros, several regional and national deputies of this group, such as Rocío De Meer, José María Llanos, Miguel Pascual and Ana Vega. The Catalan Ombudsman in Les Corts, Toni Cantó, or the PPCV have also echoed this action.

On his Twitter account, Vox He said that Patacona beach “follows the example of Madrid” and highlighted the 53,000 Spanish flags “for every countryman who has fallen into the epidemic”. “This is what the Sanchez government does not want you to see,” the group added.

The president of the CPPV, Isabel BonigIn his speech, he pointed out the “impressive” and “painful” remembrance of the victims, which “shows the magnitude of the tragedy we are experiencing”, while Cantó highlighted the “tribute to the more than 50,000 dead from this pandemic”.

In addition, the Chairman of the Parliamentary Group of Vox in Les Corts, José María LlanosIn Spain, it’s dawn for Valencia,” he said. You will always be in our memory and in our prayers”.

For its part, the PSPV has regretted that PP and Cs “are being swept away by the wave of the extreme right” and has criticized that “they are spreading an action that invades the maritime land area and violates several administrative provisions”. “They are damaging everyone’s symbols”, he denounced the formation in a tweet.

Along the same lines, the Councillor for Citizen Protection of Valencia City Council and Deputy Secretary General of PSPV of the province of Valencia, Aarón CanoHe lamented that “the idea of having a modern right in Spain is getting further and further away, especially when the PP echoes the actions of the extreme right”.

From CommitmentThe regional secretary of employment, Enric Nomdedéu, said: “Plant flags. We will pass laws”. The regional coordinator of Podem, Pilar Lima, has also referred to this fact, censoring the fact that “this is the way it is with those who cut back and privatize public health care, those who block the medicine for people with hepatitis, those who empty the system of care for dependency, those who steal from us, and those who prefer vulture funds to people with homes.