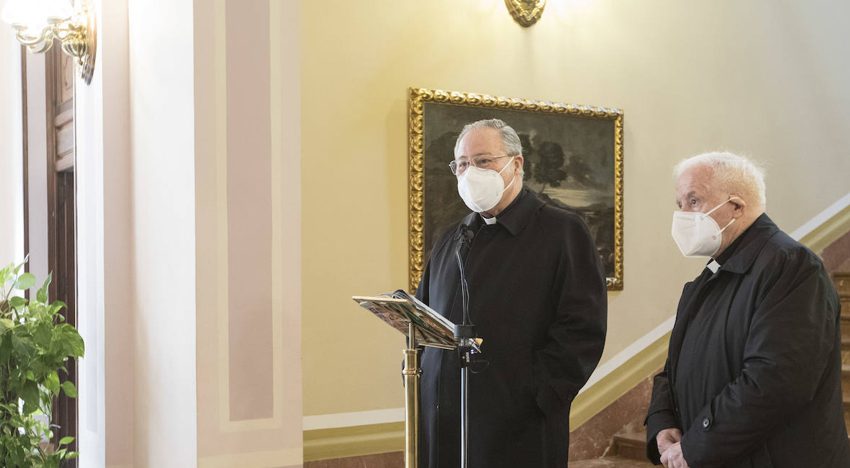 Auxiliary Bishop of Valencia, Monsignor Esteban Escudero has announced today the acceptance by Pope Francis of his resignation after reaching retirement age, in an act that took place today, Monday, in the Archbishop’s Palace, during the Angelus prayer presided over by the Cardinal Archbishop of Valencia, Antonio Cañizares.

Monsignor Escudero, 75 years old.appointed auxiliary bishop of Valencia in May 2015, where he was also auxiliary bishop from 2001 to 2010, has thanked the “help and understanding” of the diocese and Cardinal Cañizares, at whose disposal and service “I will continue to be” not as Bishop but as “Esteban”.

Thus, as expressed by Monsignor Escudero, the resignation – on reaching his 75th birthday according to canon 401 of the Code of Canon Law – has “juridical effects” because he ceases to be a bishop but in terms of “personal effects I will continue to be Esteban for everyone.”

The prelate was charged in the investigation into the V Encuentro Foundation for the organization of the visit of Benedict XVI in 2006. The case has been closed.

Monsignor Esteban Escudero has thanked Cardinal Cañizares. “for all the favors he has received during this time.“He affirmed that he will continue with his mission of forming pastoral agents in the Diocesan Institute of Religious Sciences, which he will remain in charge of at the express request of Cardinal Antonio Cañizares.

“I will devote more time to research work.”

Likewise, among other duties, He will continue to make the Spiritual Exercises and to make trips to the Holy Land.Escudero is also and has been the religious guide-animator for the Patriarchate of Jerusalem of numerous pilgrimages to the Holy Places.

He has also expressed that he will maintain his pastoral mission in the Basilica of Our Lady of the Forsaken. and “I will dedicate more time to research work”. He is currently developing a research on the relationship between Science, Philosophy and Theology, to publish a book for teachers, in the framework of the Catholic University of Valencia.

For his part, the cardinal archbishop of Valencia thanked Monsignor Esteban Escudero for his help during these years and for his dedication. and service to the diocese of Valencia, “because he has always been at its side” and expressed his wish that “he will continue to collaborate with it”.

After the announcement of the acceptance of the resignation as auxiliary bishop, made before the auxiliary bishops of Valencia Monsignors Arturo Ros and Javier Salinas, the Vicar General Vicente Fontestad, and members of the Episcopal Council and the Curia, Monsignor Escudero received a standing ovation from all those present in the Archbishop’s Palace “hall”. who applauded him as a sign of recognition and gratitude.

Likewise, Bishop Escudero received as a gift and souvenir a replica of the Holy Chalice, on the occasion also this year of the celebration of the Jubilee Year of the Chalice of the Passion. This replica is “an expression of our affection, our gratitude and our union with you,” said Cardinal Cañizares.

Esteban Escudero Torres born in Valencia on February 4, 1946. He attended primary school and high school at the Colegio de los Padres Agustinos, in Valencia. At the age of 17 he entered the Metropolitan Seminary in Moncada, where he studied three years of Philosophy and three years of Theology. After his baccalaureate in Theology, he obtained, in 1970, a Licentiate in Theology from the Pontifical University of Salamanca.

With the permission of the then Archbishop of Valencia, Don José María García Lahiguera, he began to work in the field of theology. Philosophy studies at the literary University of Valencia. obtaining in 1974 a degree in pure philosophy.

He was ordained priest on January 12, 1975. and assigned, as curate, to the parish of the Assumption of Our Lady in Carlet.

On November 17, 2000, he was appointed auxiliary bishop of Valencia.

For six years he was a professor of Philosophy at the C.E.U. San Pablo de Moncada and, since 1988, professor, head of studies and later director of the Diocesan School of Pastoral Ministry. In 1994, when Archbishop Agustín García-Gasco erected, by the Archbishop, the IDiocesan Institute of Religious SciencesHe was appointed director, regularly visiting all its branches and giving classes in Faith-Culture and Dogmatic Theology.

From 1982 onwards he taught various elective subjects at the San Vicente Ferrer Faculty of Theology.

Since 1988 he has been a member of the association “Journeys to the Holy Land with the Franciscan Fathers. Likewise, in 1999, Agustín García-Gasco, Archbishop of Valencia, named him a canon of the Holy Metropolitan Cathedral, where he held the office of Chapter Secretary.

On November 17, 2000, he was appointed auxiliary bishop of Valencia by His Holiness Pope John Paul II.He received his episcopal consecration on 13 January 2001. On July 9, 2010, his appointment as bishop of Palencia was made public, and he took possession of his see on August 29, 2010. On May 7, 2015, Pope Francis appointed him auxiliary bishop of Valencia, assigning him the titular see of Diano, Dianen(is).