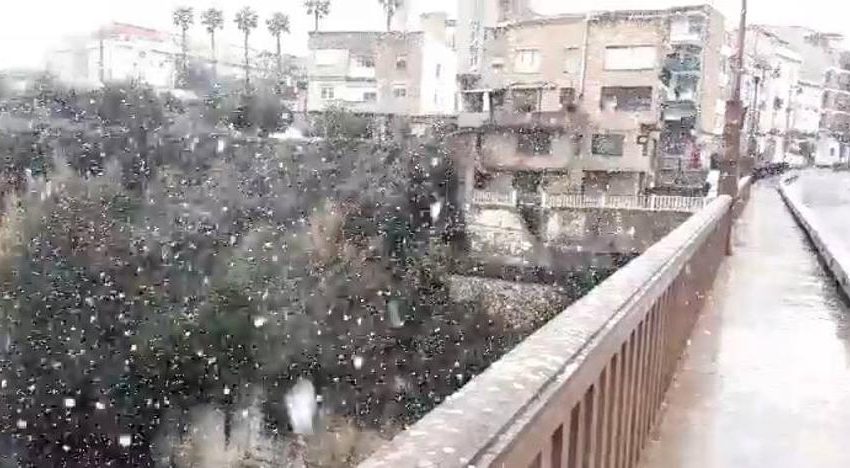 The municipalities of the interior of Alicante and Valencia live a “fully wintry” day of snowfall, downpours and plummeting temperatures. that, in some cases, reach 20 degrees of difference compared to Wednesday, as indicated by the State Meteorological Agency (Aemet).

The thermometers, with data at 16 hours on Thursday, show the change that has lived the Valencian Community in 24 hours, which has gone from a mild spring climate to cold winter. Highlights the case of Xàtiva (Valencia), which on Wednesday exceeded 25 º C and this Thursday has 20 º C less, with 5.5 degrees. The same drop has been recorded in Alcoi (Alicante), going from 21.6 degrees to 1.6º C.

For its part, Llíria y Turís live falls of 17,9º C in 24 hours. The temperature in Pinos falls by 16.1 degrees and the drop in Chelva is 15,8º C. Thus, the temperature drops are more than ten degrees in Chelva, Polinyà del Xúquer, Zarra, Valencia, Miramar, Oliva, Utiel and Castellón..

The thermometers of the city of Valencia marked at 16.00 hours on Wednesday 18.3 º C, while this Thursday the temperature at the same time was 8 º C, although the minimum of the day has been recorded at 14 hours, with 6.8 degrees.

Not only was it the lowest temperature of the day (provisionally), but it has not been below 7º C in Valencia since last January 20. That is, since the early morning of January 20 last had not been a temperature as low as today at noon in Valencia.

Aemet has stressed that it is “very rare” to have such a low temperature in Valencia at 14 hours on a day in March. In weeks falleras had only happened in 1939, another year without Fallas as this 2021.

Also, snow has made a notable presence in the inland municipalities of the provinces of Alicante and Valencia..

In Alicante, specifically in the regions of l’Alcoià and El Comtat, it has snowed at an altitude of 500 meters in places like Alcoi, a city that recorded very cold with 1.6 º C. The most affected areas have been Agres and Banyeres de Mariola.. In the latter the City Council has suspended classes in the afternoon shift due to the intensity of the snowfall, as reported by the consistory in social networks.

The municipalities in which it has snowed above a height of 600 meters have been Alcoi, Agres, Benifallim, Banyeres de Mariola, Cocentaina, Ibi, Onil and Castalla. Also in the Maigmo -municipal district of Tibi-.as reported by the Climatology Laboratory.

During the morning, snow has appeared in some mountains in the interior of Valencia at 1,000-1,100 meters. It has been seen in the region of the Ayora-Cofrentes Valley, with some hail in the town of Ayora. Also in Utiel, in Yátova, Enguera and Ontinyent..

Thus, the day has also left heavy showers, but very focused on coastal areas of Baix Vinalopó. While in Elche. the accumulated rainfall has been less than 5 mm and the airport recorded 15, in the area of Valverde, between Elche and Santa Pola have exceeded 50.

The rains have been seen this Thursday in the Valencian Community and are expected to continue until Saturday, March 20, according to the forecast of the State Meteorological Agency (Aemet).

For St. Joseph’s Day, the northwest wind will continue with strong or very strong gusts in the northern third and precipitation is expected from noon. The snow level will be around 500-1,000 meters.

On Saturday there will be cloudy skies with precipitation in the first half of the day that will be very likely in the southern half and unlikely in the north. And Sunday is expected to be little cloudy or clear sky although in the early morning are not ruled out weak precipitation.