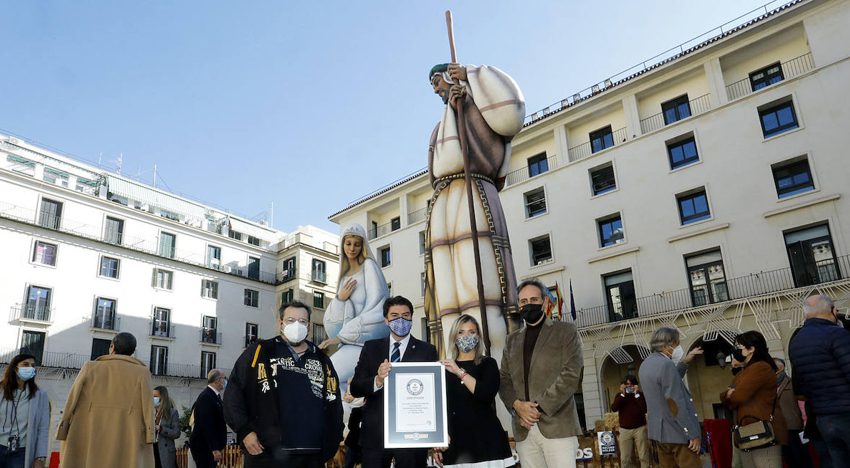 The San Jose Staff is almost 19 meters long. The Virgin Mary touches the twelve and the Child Jesus is over three. With a nativity scene of such disproportionate size -a total volume of 56.02 metres- the city of Alicante has earned its place in the Guinness Book of Records. Created by the same craftsmen who make the ninots for the bonfires of San Juan, with their brand new ‘megabelen’ they steal the mark of ‘belenistic’ gigantism from the Mexican city of Monterrey, which has held it since 1991.

In the square of Alicante’s Town Hall, the promoter of the project, stands this spectacular and very high set that is supported by a metal structure and has cost almost 140,000 euros. It may be the most expensive nativity scene, as well as the tallest.

Designed to withstand rain, wind and salinity, its creators believe it will last at least three Christmases. They want it to be “a singular Christmas landmark” to help revitalize commerce, hotels and restaurants, shaken by the pandemic, and the now non-existent tourist activity.

Moments of the official presentation of the crib as a ‘Guinness World Record’. / EFE / L. P.

José Manuel García Esquiva ‘Pachi’ (Alicante, 1967) is the ‘foguerer’ artist who has designed the ensemble. It took him almost two months to set it up with the help of a dozen colleagues and five collaborators. His intention is that whoever enters the square will look at the larger figure. A St. Joseph who in turn looks at the Virgin, who contemplates with tenderness her son.

“We want to transmit that we get along well, like this ‘Holy Family’, and that together we can get out of this,” says ‘Pachi’ alluding to the ravages of the coronavirus. “We hope you know us all over the world and that you know that here in Alicante there are some great artists and craftsmen”he adds. The birth in Alicante deprived Monterrey of the scepter in the race to heaven of the nativity scenes, which had been led for almost three decades by a Virgin and a St. Joseph of 5.2 meters and a Child Jesus of ‘only’ 1.25. The Mexican totals 28.58 meters, half that of the nativity scene in Alicante, as certified yesterday by Lena Kuhlmann, a German judge of the Guinness organization.

Without false modesty, Luis Barcala, the mayor of the PP, baptized the manger as “the greatest birth in the world” and celebrated that forty families “benefited” from its construction. The municipal opposition, as it does, criticizes the high cost to the municipal coffers of building such a massive nativity scene. “Alicante has another Guinness Record: a waiting list of ten months to get an appointment in social centers,” said Vanessa Romero, mayor of Unides Podem.