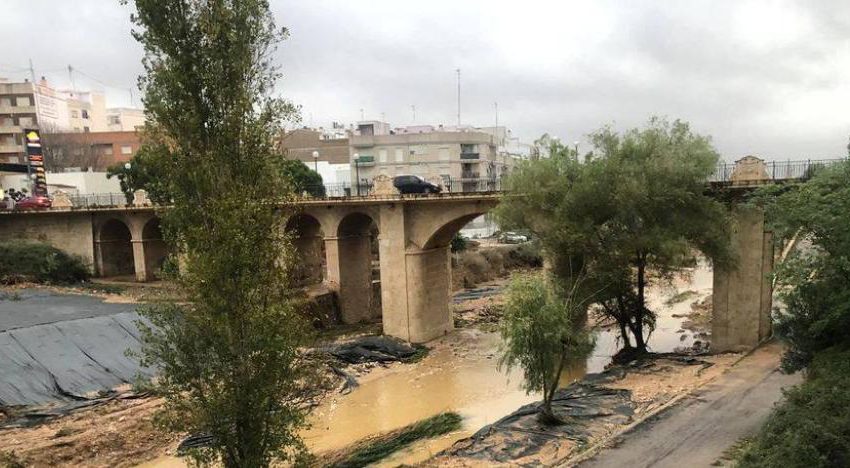 After the storm comes the calm and this morning it was time to check the damage caused by the storm that hit the municipalities of Horta Sud with force. Fortunately there has only been material damage although the city councils warn that they will be numerous. The main efforts of the day have been focused on adapting the rural roads to open the way to those scattered in the municipalities of Picassent and Torrent.

The mayor of PicassentConxa Garcia has visited the areas, accompanied by the area of agriculture and municipal technicians. “The works will be mainly for restoring the margins of roads that are broken“, he points out, after the Júcar-Turia canal overflowed, and notes that the tractors are already working on it in order to open the way for the scattered ones. In the town centre, action has also been taken to remove the stones from the train tracks that the water current dragged into the streets and to close some of the underground containers that came out of the site.

One of the closed passages in Torrent. /
LP

However, what is most worrying is the action that was taken in the Picassent ravine to avoid the presence of the canes with a significant investment and whose infrastructure has been totally destroyed. It was precisely its riverbed that was the focus of all the expectation on the 5th due to the flow it reached.

At TorrentThe special device of emergencies works uninterruptedly since Tuesday to watch over the citizen safety and to attend the incidents that were taking place because of the 102 liters per square meter that the intense rain left in the city in a short period of time. This morning the cleaning up mud and leaves dragged into the scuppersThe project also included the removal of some branches and mud from the public road in those places where the water had left it impassable.

Early in the day, special control and supervision of the entrance and surroundings of the schools was carried out to ensure the safety of the schoolchildren.

The Catarroja ravine on its way through the polygon this morning. /
LP

On the dry land side, the material damage has been considerable. The mayor, Jesús Ros points out that in some ravine passages “the force of the water has ripped the asphalt and you have to cover them with gravel and wait for the ground to dry out to repair it. There were also incidents in the urban area with a car that got stuck in the Parc Central tunnel and water bags that were registered in this same area.

The Local Police managed to identify the owner of the car that dragged the Poyo ravine until Catarroja and that was the image of the day. The agents took the registration of the vehicle and saw that it was registered in Torrent. They called the owner by telephone and told him what had happened, which he confirmed “had left it well parked”.

At Catarroja and Massanassa all eyes were on the Poyo ravine…who hadn’t had that kind of flow for years. In fact, it raised the expectations of the neighbors, without exceeding them. Flooded streets and the rescue of a person in Massanassa in the Port area were the most relevant incidents caused by the waterspout.

At Silla, the recently built infrastructure to prevent flooding fulfilled its purpose but the Rambla could not withstand the more than 100 liters dropped per square meter and flooded, closing to traffic the tunnel that saves the tracks. “We receive the water that comes from other municipalities, plus all the water that fell here,” says the mayor, Vicente Zaragozá. They had it worse in BeniparrellThe city centre did not register any incidents, but the Vereda Sur industrial estate has requested the declaration of a catastrophe zone, due to the damage caused by the overflowing of the ravine.