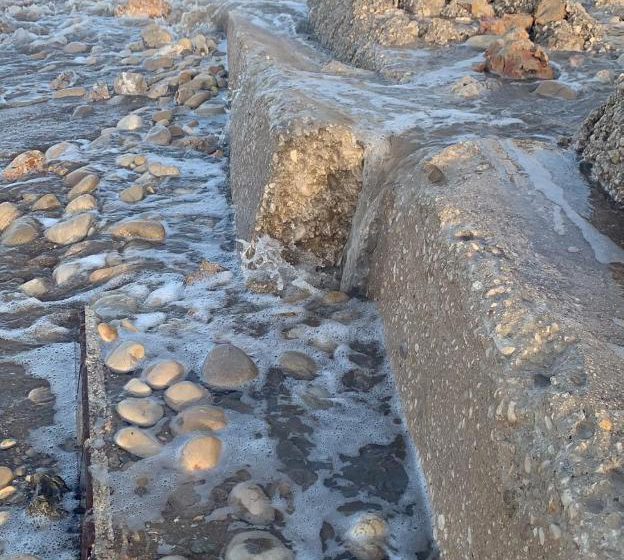 “There are some spots where there is no beach, the sea has swallowed up all the sand. People are dodging large stones and the remains of walls of some houses that have not yet been removed. We are lucky that no one has been injured, but one day we will have a scare. The residents of Les Deveses beach, in the northern part of Denia’s coast, once again warn of the delicate situation they are experiencing this summer, where “carefree and carelessness are united by the hand”.

With regard to the first thing, they point out, “nothing new, we’re talking about neglect by public institutions, which have done absolutely nothing to make the beach more suitable this summer”. In fact, the appearance of this stretch of the coast of Denia is “dismal”. Many of the houses have open ‘wounds’ that caused the storm ‘Gloria’ earlier this year.

There are still many terraces in the front line that have not been rebuilt, and some of them are still lying on the shores, which are now bathed by the Mediterranean, since in some places not even a metre of sand remains, “eaten by the sea, as it has always done since the breakwater was built”, they point out.

But the poor condition of the beach does not discourage bathers, who seek out every nook and cranny, however small and difficult to reach.

A situation that the neighbors call “dangerous. Anyone can slip trying to get around the stones, or fall on one of them. Luckily, they point out, there has been no serious accident “at the moment”.

The image of abandonment, they say, is not only seen in the few centimetres of beach that are still visible. The basic services have also diminished, they say, “if we are usually the last ones in line, now we are completely abandoned”. The neighbors are pessimistic and believe that this summer will have to end with all the drawbacks “of having a broken beach.

Even so, they do not resign themselves and do not rule out some kind of mobilization, “always within the framework of what the health crisis allows us to do. We will talk about it in the next assembly that we have called for August 10. They are trying to call the attention of the authorities, local, regional and state, to which they say, “we have no response whatsoever since we asked for a meeting to try to unblock this problem”.

Many of the homeowners in the area affected by the storm are also still stuck. “They won’t let us fix anything, we are totally defenseless and if another storm comes it will take everything,” they pray.