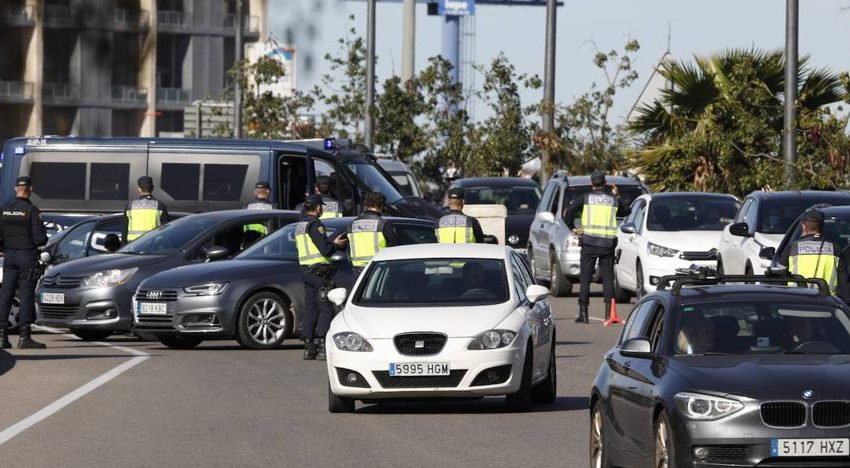 The sounds of car engines and the din of beeping caused by impatient drivers raised the level of noise pollution in Valencia yesterday, especially at points where traffic jams occurred from noon to late afternoon in the first weekend of perimeter closure ordered by the Consell in cities with populations over 50,000 inhabitants to curb the spread of the coronavirus.

In the case of Valencia, the City Council has prepared for this weekend, from 15 hours yesterday and until 6 hours on Monday, an operation with 350 Local Police officers, quad bikes and drones and, in addition, there is a reinforcement of the National Police, in order to control compliance with the rule and prevent people from moving to their villa or apartment without having a justified cause. That’s right, It should be clarified that access to the districts of the Albufera is feasible.

Among the areas of Valencia where more traffic jams were recorded yesterday include the Camino Nuevo de Picanya (San Isidro neighborhood), exit to the road to Torrente; in access to the Pista de Silla, on the avenue of the Valencian Parliament and the Avenida del Cid.

Precisely on the Camino Nuevo de Picanya was placed one of the main controls, with at least nine local police, three cars and a van. From 3 p.m. they began to carry out random checks on drivers, to check that no one was leaving Valencia without good cause, and the queue of cars that formed reached Tres Forques and Archduke Carlos. At seven o’clock in the evening both on the Camino Nuevo de Picanya and at Tres Forques there were still collisions and stretches of traffic jams.

Traffic jam in Valencia before the perimeter closure.

The agents stopped several vehicles to explain the reason for the trip and most drivers immediately showed the paper proving their trip. “Most of the drivers we stopped were carrying the paper justifying the trip. Some other, about four – in the control of 15 to 16 hours – had no justification for leaving and we have made them take Gremis Street to re-enter the polygon of Vara de Quart and stay in Valencia,” said the commissioner of the Local Police Fernando Gimenez, who added that “although it has been warned by the press, television and radio of the new measure on weekends, there are still people who do not know or do not want to know, but we are in these controls to help, inform and prevent people from leaving.

A driver like Julian L.who wanted to turn from Camino Nuevo de Picanya towards Vara de Quart, indicated that he understood the control, “but those of us who wanted to enter the industrial estate were not allowed to turn and we had to go as far as Tres Forques and cross the site and it took us an hour to get to work”.

In another exit of the city where the cars were also stuck was in the avenue of Cortes Valencianas.. The drivers were resigned, but regretted the time they had to wait to be able to continue their journey. This same image was produced in the Avenida del Cid, where the cars looked as if they were going in procession.

It should be noted that at various points in the city there will be permanent controls throughout the weekend 24 hours and in others, of a temporary nature. In the access to the track of Silla, yesterday there were also major traffic jams both for cars arriving by Ausiàs March and for those arriving from Fernando Abril Martorell.

At a gas station near the Silla track, Rosana A. indicated that she stopped before noon to refuel and have a drink, “but I have to go with the car to the Safor, before they close at 15 hours Valencia”. He explained that he had come down to go shopping “and when I arrived there was a control of the National Police of about 20 agents and in that time there have been some delays, but now to go is clearer.

Daniel Pérez, a university student, indicated that “we are leaving for Denia because they have suspended the on-site classes and they are going to be online until mid-February, so I’m leaving before they close the perimeter of Valencia”. Another resident of Valencia, Ángela Cuenca, explained that she hadn’t heard about the closure, “but I think it’s perfect to avoid more contagions. The problem is that we are paying for those who do well, by those who do what they should not. I saw yesterday the photos of people in groups on the beach and I think it is fatal, it is an injustice when there are people dying.

In the northern part of the city traffic began to be heavy at half past two in the afternoon. In the north boulevard, towards the Hermanos Machado avenue, the large influx of people began to be noticed, but after three o’clock in the afternoon in this area there was still no control device for exits or entrances despite the fact that at that time the perimeter closure of Valencia was already in force. Neither in Alfahuir with Alboraya nor at the exit to the V-21 by Catalunya Avenue was surveillance until after half past three.

Crossing a roundabout is passed from Valencia of Alboraya, a few meters separate the residents of one and the other population, who commute daily between the two. However yesterday they were met with police control due to the measure imposed by the Consell. In the street Ingeniero Fausto Elio, next to the EMT garages, the retentions were already noticeable at the exit of Valencia towards the V-21. “We’ve been waiting here for an hour in the car to get home, it seems a bit unfair and quite unnecessary,” protested one of those affected. in the traffic jam. Most of them were prepared, with their identity documents and proof of their companies, but not a few of them were made to turn around. Up to four agents made a chain: while some asked the drivers for their documents, others gave the go-ahead and authorized or not the passage of each of the vehicles. “We have to speed this up, but it is also costly to control each car,” said one of the agents.

“This is desperate, for a 15-minute drive I’ve been here for almost an hour, 50 minutes right now, I think this type of measure doesn’t make sense because if people want to gather in houses or have parties they will continue to do so and in the end we pay those who try to do things right,” complained another man from inside his car. Little by little the tension between the drivers grew.

“Come on man this can’t be,” shouted some as they pressed the horn and the noise made the waiting people even more impatient. “I understand that you have to put restrictions but I don’t know if this will be effective the truth, I think that whoever wants to leave, in the end will find a way. The best thing is to try to go out as little as possible, but if you don’t forbid it, people don’t do it and now we have to put up with it,” commented a young woman driving home from work. This area near the beach was still jammed late on Friday afternoon.

Checks were also carried out in the metro, in this case, by the Generalitat Police.And is that the metro is running on all routes and stops, but the agents make random checks to verify that the displacements are justified, since Valencia, Torrent or Paterna are closed perimeter on the weekend. In fact, Ferrocarrils de la Generalitat has reinforced the auxiliary staff to inform about the services and warn about the limitations of the weekend.

For example, those who are looking forward to the weekend to go to the apartment or villa are going to have to think twice, as it depends on where you live and where your home is located.

Your browser does not support iframes

In this PDF you can see an official document with the answers to the most frequently asked questions.

In principle, it is allowed to use natural areas such as parks and beaches, as long as they are within the municipality. However, after the overcrowding detected yesterday on the beach of Valencia, Alicante has warned that it will close the space if this incident is repeated.

Attend functions, movies, or shopping malls will also be allowed within business hours and local limits. We must remember that all shops except for food and pharmacy must close at 18:00 hours and that the hotel and catering trade remains closed for consumption on the premises, although it is allowed to buy takeaway or order at home, but only before 22:00 hours, when the curfew becomes general.