Alberto Fabra: “Castellón airport is a historic opportunity for the province of Valencia and for all of the 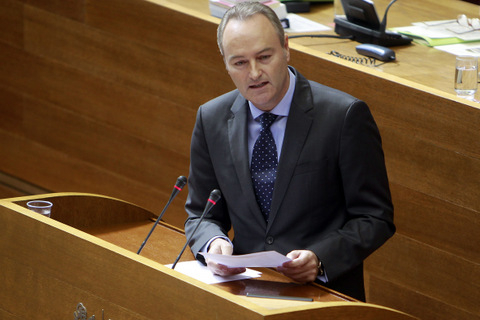 Comunitat ( The Valencia community or region as a whole)”

The history of the Castellón-Costa Azahar airport has so far been a controversial and expensive one, but despite the fact that over three years have passed since the official opening ceremony and no commercial aircraft have yet been seen on the runway a giant step forward was taken yesterday, when the new airport management contract was signed.

The Canadian company taking on the contract is SNC-Lavalin, which already runs sixteen airports in Europe, and alongside CEO Robert G. Gard at the signing of the contract was the regional president of the Comunitat Valenciana, Alberto Fabra.

One of the clauses in the contract specifies that Lavalin now have a period of five months to get the first commercial flights running, but looking even further ahead the company is optimistic that it can hit its passenger volume targets and make this the first privately managed public airport in Spain a profitable venture.

The first job will be to ensure that all the necessary licences and permits are in place before the five-month period expires, and after that the first target is a figure of 400,000 passengers per year. This is the break-even point estimated by Lavalin, and the company projects that it will be reached within three years, although in the medium to long term it is hoped that the passenger volume will top 1.2 million annually. Above this level, the terms of the contract signed yesterday stipulate that one euro per passenger will be paid to the regional government, who can thus begin to recoup their reported 138-million-euro investment in the project.

The stated aim of the airport is to generate more economic activity in the province of Castellón, and according to various studies when it is in operation around 1,800 jobs will be created as a result (including 300 or so at the airport itself), and the economic impact will amount to approximately 170 million euros.
Whether the airport will be a success remains to be seen, but in presenting the business plan Alain Russel stated that the million passenger mark would be reached by 2025 and the 1.2 million threshold would be exceeded by 2029.

Mr Russel comes to Castellón having overseen the airports of Nice and Strasbourg, and recognizes that the installation has received little in the way of good press over the last few years. However, he advocates a dynamic approach and asserts that he is already involved in negotiations with various airlines.

Those hoping to open other privately managed airports in Spain, such as the regional government in Murcia, will be watching on with keen interest and following developments, as Sr Russel and his cohorts strive to remove the name of Castellón from the list of Spain’s “ghost airports” by the end of this year.
Image: Gva. President Fabra