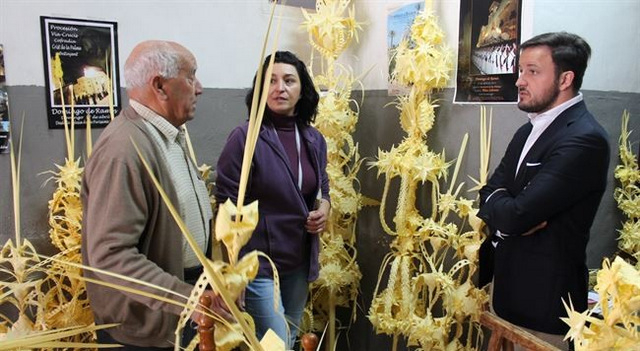 Elche is one of the most important areas of Spain for the production of palm braided items, traditionally carried during the Palm Sunday processions and production is in full swing as the countdown to Easter begins.
Exponents of the traditional craft of white palm braiding in Elche are currently in full production prior to the onset of Semana Santa, busy producing thousands of plaited palm items for sale, as well as putting the finishing touches to the gifts which will soon be sent all over Europe by the Town Hall in order to celebrate Palm Sunday.

Among the recipients of these offerings are Pope Francis, King Juan Carlos I and Queen Sofía, and this year the Serrano-Valero family workshop in Elche will be making these prestigious gifts.
On Monday local councillor Pablo Ruz visited the workshop producing the royal gift and saw the piece being prepared for Queen Sofía which will be over two metres high.

The Carbonell family workshop is also working non-stop to produce all types of decoration using the sun-whitened palm leaves, either braided or flattened, and it is estimated that by the time Semana Santa begins over 10,000 works of art of this type will have been produced in Elche. Each of them requires painstaking work, beginning with those who select the best leaves and ending with the braiders themselves.

Of course the ancient craft, like the palm trees themselves, has been under threat in recent years from the prevalence of infestation by the red palm weevil, which workshop owner Francisco Serrano reports has caused the loss of around 100 trees from the famous palm grove of Elche this year. Given that each tree produces around fifteen white palm leaves, this has a significant effect on production at the workshops.

The weevil has also affected the way in which the braiders purchase their raw materials: in the past, they paid palm tree owners when the leaves were tied back and covered so that they would grow as white leaves ready for plaiting, but now they pay on delivery as they cannot afford to make a loss on leaves from trees which turn out to be affected by the destructive weevil. This is particularly the case as the weevils and the braiders are both interested in the same trees: the healthiest ones.

Meanwhile, the fact that one of these products will be received by the Pope in Saint Peter’s Square is, says Sr Ruz, a source of pride for Elche, and other recipients this year include national president Mariano Rajoy, regional president Alberto Fabra and the bishop of Orihuela-Alicante, Jesús Murgui.
These hand made palm braids are on sale in florists across Spain prior to Palm Sunday and are also frequently sold outside churches and in flower markets.