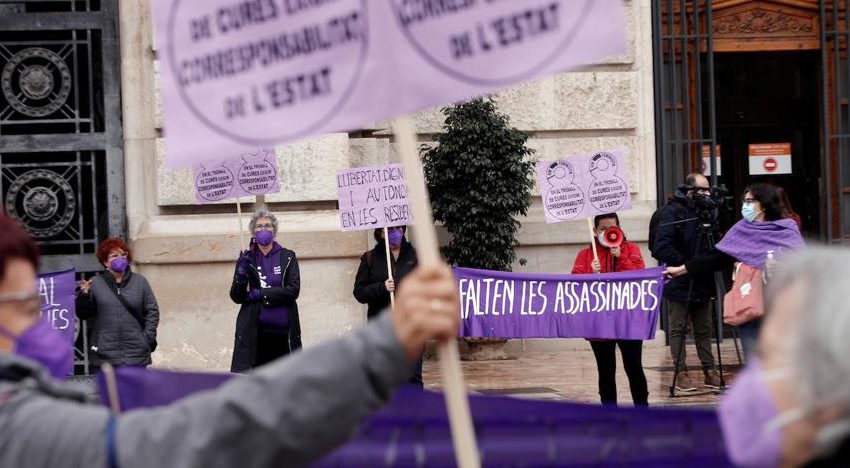 With purple masks, banners, safety distance, gel and pans, about a hundred women have gathered in front of the Government Delegation in Valencia. “The marchismo is also a pandemic,” said one of the purple sheets that were raised high, because despite the pandemic “we can exercise our rights and we can claim on a day as special as today, Women’s Day, and always respecting the safety of all,” said one of the spokespersons of the association that has organized the events, the Feminist Assembly of Valencia.

No mass demonstrations but making a lot of noiseThis is how women have taken to the streets in the Comunitat. The organizers have assured that they are being a success the concentrations and acts summoned, that began at 9.30 hours of this morning in l aplaza of the City council and that have continued in front of the Conselleria of Inclusive Policies and the Delegation of the Government.

“Feminism will be anti-racist or it won’t be,” they shouted to the rhythm of drums and clapping. In the city of Valencia, the women remembered above all the rights of immigrant womenbecause their situation has been aggravated by the Covid-19 crisis.

They explain that the rights of these people “are buried under this pandemic situation, we find that the people who need it most, because of their irregular situation, because our society leaves them out of subsidies, resources, the majority or a large part of immigrants work in informal sectors and their rights have been even more obviated.”

In the Comunitat will be held another 50 rallies on the occasion of 8MThe police have not received a report against any of them from the Health Department or from the national and local police headquarters. According to Magda Sancho, spokesperson for the Asamblea Feminsita, “at all times we have respected the security measures but also the people, so what we have programmed to commemorate such a special day, with different concentrations we want to bring the concentrations closer to women and to facilitate That there are no crowds of any kind.”

On the cancellation of events and rallies in other cities, such as Madrid, he merely transmitted. support for women in other communities and points out that “using the feminist movement to politicize and as a way of doing politics is one more example of how they have tried to silence the feminist movement, and surely it is the only movement that stands up to the patriarchal and sexist system”.

With applause, dancing, jumping and without ceasing to raise their voices, many of them excited on this day to ask and demand equality. “On this day we had to take to the streets even if we are fewer, but to sing, to shout, to make ourselves seen, today more than ever it is necessary to go out on the streets”, said Dolores Jacintos, Migration and Refuge Commission of the Feminist Assembly.