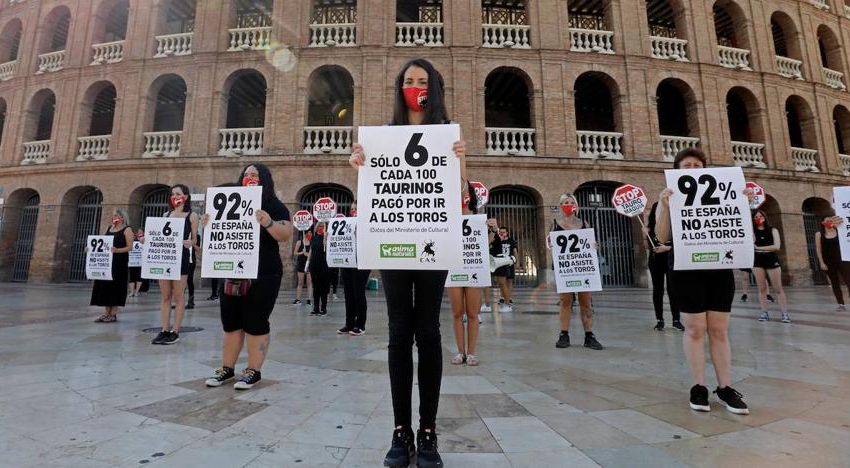 This morning, the organizations AnimaNaturalis and CAS International were the protagonists of a Anti-bullfighting action in front of the Valencia bullring during which they have shown banners with slogans such as “92% of Spain does not go to the bulls” to claim “a better normality free of cruel parties” and to ask that “bullfights never return”.

“During the quarantine, most of the country’s fairs were cancelled and the bullfighting sector (which already subsisted, to a large extent, thanks to public money), demands new budget allocations to stay afloat, in a cruel and anachronistic business that is doomed to bankruptcy”, explain the organisers in a press release in which they add that “we do not want even one public euro to be used to subsidise animal abuse”.

The call follows a series already begun in Pamplona and Madrid “with a wide impact on national and foreign media,” according to the statement Cristina IbalezThe coordinator of AnimaNaturalis in Valencia.

“From AnimaNaturalis an initiative is being promoted that has added more than 173,000 people, who have already written to the Minister of Culture, José Manuel Rodríguez Uribe, so that he does not allocate aid to the bullfighting sector. Bullfighting people are asking for new economic subsidies to support their practices. We believe that the government should prioritise economic aid in health, vulnerable families, R+D and aid to companies that are experiencing great difficulties”, he adds.

According to the latest survey of “Cultural Habits and Practices 2018-2019” by the Ministry of Culture, spectators in bullrings have decreased by 15% in the last four years, in which attendance at bullfighting events has dropped by 554,000 people. Only 8% of the population attended a bullfighting celebration (only 6% in bullrings, the rest on TV). With the singularity that almost 20% of the attendees did not pay their entrance, which evidences the magnitude of the aid, adds the note.

“Contrary to what has always been spread, bullfighting is not the second mass spectacle in our country, not even the third or fourth, but the tenth, according to data from the Ministry of Culture. We Spaniards prefer football, cinema, monuments, museums, concerts, exhibitions and art galleries to watching a bullfight,” he explains.

AnimaNaturalis assures that the bullfighting sector receives every year budget items of thousands of euros to finance bullfighting activities from city councils, provincial councils, autonomous regions and also from the Spanish Government, to subsidize bullfighting clubs, associations, schools and festivities.

“We think that the Government should not only ignore these demands, but should also reconsider the periodic aid that is destined to bullfighting from the different administrations and refer them where it is most necessary,” considers AnimaNaturalis.

The organization details that the Provincial Council of Valencia will allocate 170,000 euros in aid to livestock of fighting cattle to address the effects of the pandemic Covid-19. It adds that the Valencian Community has the sad record of being the region with the most bullfighting celebrations, some 9,000 festivities in which public money abounds and supports these practices.