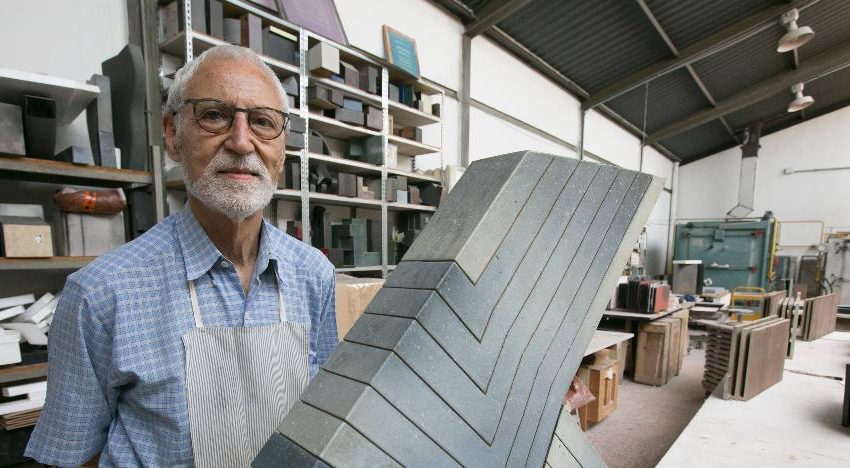 At 82 years of age, Enric Mestre, the world-renowned sculptor from Alboraya, dedicates his life to creating. He can’t stop, and this can be seen in his studio full of collections and notebooks where he shapes his ideas. For this reason, since the Ministry of Transport proposed two possibilities to compensate him for the destruction of the sculpture of the hang glider by the works of enlargement of the N-220, his hands seem to be drawing sketches by themselves.

-Which of the two options are you going to choose?

-I’m going to see if I can do something else because I don’t have the space or the energy to make a replica of the work they’ve destroyed. It’s been 34 years and my studio is full, I’d have to rent a hall because of the size of the sculpture. I’ve already been doing sketches but I’d like it to be closer to Valencia because there, it’s cannon fodder for graffiti and garbage. It will be made of iron and ceramic blocks, so the work I will have to do will be more of a direction.

-How did you feel when you saw the empty space?

-It was a very hard blow. She is my child and whenever I passed by I saw her and that gives you a lot of satisfaction. But I already knew that they had destroyed it, I had no doubt because to move it they had to make a big investment and use a very powerful crane.

-Could it have been handled any other way?

-The truth is, I was a bit of a handful. The ceramic bricks couldn’t have been removed because they would have possibly broken. But what hurts me most is that I wasn’t even told about it before. I had to find out by chance, because I usually pass by there quite a lot when I go to Manises to get material.

“There are associations that have lawyers but by calling me, they’ve tied my hands a little.”

-Do you intend to bring what happened to justice in order to restore your rights as an author?

-There are groups of artists who have lawyers but to sue the State is very complicated and even more so when they have called me personally to offer to return the sculpture. With that I feel that my hands have been tied a little.

-Is urban art conditioned by politics?

-Yes, I think so, but in the end everyone sins the same. The concern for art is minimal, especially here, although in other countries it’s not the same. Making a work is not just leaving it in one place and that’s it, but you have to take care of its maintenance. Behind the door of my studio I still have a base of that sculpture in question that I made to replace the one that had been filled with graffiti and, there it is, still gathering dust for 15 years. Nobody ever called me to ask how to clean the graffiti, just someone decided to paint it white, and I’m still here and alive.

-Is this the first time something like this has happened to you in your career? -No.

-No, it’s quite common in urban art to go through complicated situations. I made a sculpture for the Alboraya City Hall, a tribute to the huerta in a small square that included a ditch with water. But the government changed and an underground car park was built there. The two stairs to go down were next to the work and they only left the central part so it lost all its essence. They didn’t care, they always tell you that it won’t be noticed but it’s your creation and you know it’s not.

-Have you received much support these days?

-Yes, of course, from artists, friends, colleagues… and visits from the media. It’s been busy days but, well, I come here to my studio and get to work and do my stories.

The artist, Sofia Porcar, with one of her daisies. /
LP

An artist claims to have her work returned to Paterna

Sofia Porcar is the creator of what is known as “the daisy roundabout” in Paterna. Her case bears some similarity to that of Mestre, of whom she is a disciple, with the difference that her work remains in safekeeping in a municipal warehouse.

However, the artist suffered psychological damage that continues to drag on after witnessing how one day in November last year, without warning, some workers were loading into trucks everything that had cost so much effort. Now, after what happened to Mestre, “everything has been removed again”, she confesses, “it was very hard to see how they destroyed your work because the daisies were embedded in a base of two tons of concrete, simulating a garden”.

Sofia is considering taking the issue to the courts because “the whole thing has to be returned to the way it was. I had a hard time designing the space that was a tribute to women”. “They have to respect intellectual property, even if it has been paid for,” she says.

The author won a competition of ideas to design the roundabout in 2010, but last year, the artistic group was replaced by a work of Alfaro, given by the artist’s family, the same family that presided for years the factory of Galletas Rio, located in the same area of Paterna.

Consulted municipal sources, they assure that Porcar’s work is perfectly stored and that it will be located in a roundabout in Fuente del Jarro as it was in its previous location, in an action that will be carried out by the municipal works brigade. They also warn that the author was not notified because “her name did not appear in the file”.