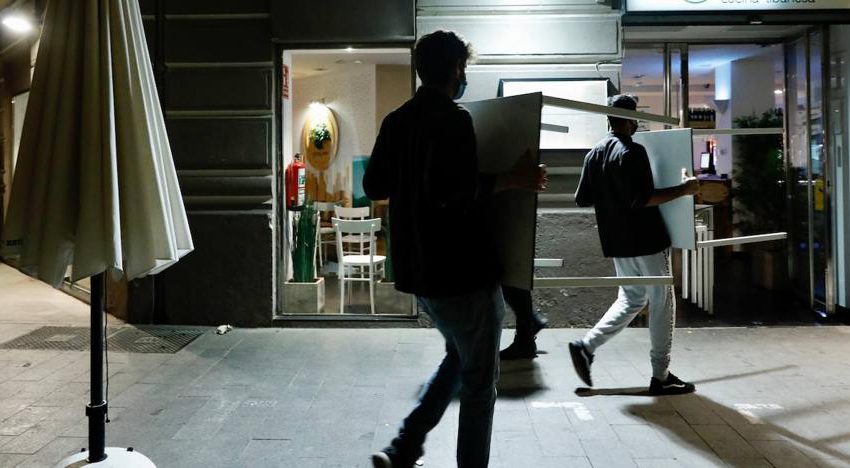 Thirty-nine years and eight months after the last curfew decreed in Spain, that of coup lieutenant general Jaime Milans del Bosch, the measure is again in force in the Comunitat. This time with all those of the law and with prolonged effects. The announcement made at noon helped raise awareness, and although it started at one in the morningFrom half past twelve it was already difficult to see souls moving along the great avenues of the centre.

The area of Ruzafa, one of the capital’s leisure hotspots, began to be deactivated after midnight, with the collection of terraces well before the deadline. “Some customers either get told or they don’t move. They don’t remember. They’re comfortable and they forget.” explained a worker of Doña Petrona, located in front of the pedestrian side of the market. A couple, the last one left on the table squeezing the glass, reflected on the measure. “It affects you in that the freedom to come back at any time you want is over.” she said. Like in the teens.

Past one, things about the novelty of the measure, you could still see a group of young people on the street. Talking on the sidewalk. More than six. In both Baron de Cortes and Azorin Literature. A National Police patrol was already visible, with the immediate effect of deterrence. No intervention was necessary. In Literato, Paloa walked home accompanied by his partner: “It disrupts in the sense of planning ahead, for example to go to dinner earlier, and you can no longer do it far from home.”

Back in the vicinity of the market, around 1.10 p.m., only a few passers-by appeared, almost certainly workers who were picked up. From a window facing the Plaza Dr. Landete one could hear several girls singing. It sounded like a domestic karaoke. Consulat del Mar Street looked deserted and the traffic lights changed the record uselessly. Nor did the cars pass.

A little more traffic could be seen at Guillem de Castro, where a luminous panel reminded us of the restriction of mobility. Mostly there were free taxis, some police cars and an ambulance.

The activity dropped mostly around 1:30. He had already given enough time for even the most backward of them to be confined to their homes. Empty on the right bank of the river, in the vicinity of Plaza América (it scared the final stretch of Marqués del Turia, with the only light of the traffic lights breaking the postcard) and next to the El Saler shopping centre, where it seemed that the adaptation works were still in the early hours of the morning. At least until two o’clock, no police checks were seen in the area or at the Los Anzuelos roundabout. The deterrent was mobile.

At 2:10 a.m., calm reigned in the vicinity of Cedar Square. A neighbor was walking the dog just as a local police car appeared. He was informed and headed home, although he claimed that the animal is used to going out at certain hours in the morning. He wouldn’t make a statement.

The same agents, in Manuel Candela, stood in front of a fast food restaurant with lights. It looked open, but the workers were finishing up the business for the next day, although the cops urged them to close the door to avoid confusion. In the opposite direction, towards Blasco Ibáñez, another patrol passed by equipped with a luminous information panel. “Curfew from one to six.” “All is quiet.” diagnosed by the driver.

A little later, on the Royal Bridge, Alba Calabuig and Dama Sempere said goodbye before heading for their respective homes. They work in the hotel sector, in the area of the beach. Between closing, picking up and making their way with the bicycle, it was almost 2.30 a.m. “It was noticed that there were more police and some cars were stopped”, explained the first one, who also reflected on the impact of the curfew in her place. “People have been leaving early. Other days you have to remind them that at one o’clock it closes.” continued. The lady shared the diagnosis: “By eleven o’clock we would have occupied about a third of the tables”. Something unusual, she said.

In the five minutes of the talk, two cars passed by Tetuan Square, one of them from the National Police. On their way back, they barely passed anyone. Just two people who asked them for money. One got a few euros and the other two bottles of water. “I don’t know how to say no,” explained the second young woman.

The street of peace, without traffic, it lived up to its name a few minutes later. Same scenario in Poeta Querol and in the Town Hall Square, who slept in the most absolute silence. “No comparison with what you see on other nights,” replied a taxi driver waiting by the fountain after being asked if he had noticed the restriction during his day: “All you see are taxis and cops.”

Muhammad Saad I took advantage of the stop in front of the bullring to clean the windows of the taxi. A colleague in front and another behind were the only souls in the area. “I’ve been here an hour and nothing.” he pointed out. On a normal day, understood as a day in the context of a pandemic, with restrictions on nightlife but no limitation on mobility, “you would make at least one or two trips in an hour.

The views from the Germanías Tunnel were a reflection of an exceptional night at three o’clock in the morning, when the clocks struck two again. No cars and no people, when on a normal day, before the virus, it was time to move on after Ruzafa’s closure. Another reality, light years away from the current one, that seems almost impossible to recover.

The Local Police of Castelló has intervened during the first night with the curfew in force in a total of seven parties in private homes, as well as three times by nuisance on the public highway. In addition, the officers have instructed two drivers who were driving under the influence of alcoholic beverages and made an administrative complaint to a drunk cyclist.

Local police sources have reported that “in general” there have been no serious incidents during the first night with the new restrictions on night-time mobility. Thus, CIMSE has recorded from 01.00 to 06.00 a dozen services.

Specifically, for parties in homes, the Local Police of Castelló has made seven services, although all of them have been solved with police presence and have ceased the neighborhood nuisance at the end of it.

The officers have also intervened on three occasions for public nuisance and have instructed two attestations to two drivers who were driving under the influence of alcoholic beverages and have filed an administrative complaint against a drunk cyclist.

Alicante
32 minutes for not wearing a mask and three bottles

The device organized by the Local Police to guarantee the curfew during the first night of new restrictions has worked “without incident” and with the “active” collaboration of the hotel and restaurant establishments, which “have helped to clear the terraces and premises before one in the morning”. However, police officers have lifted a total of 32 curfew acts for not wearing a mask and has dissolved three bottles.

The operation to enforce security and health measures to deal with the Covid-19 of the Local Police, carried out before the curfew, has been closed with 90 complaints for not wearing masks, consuming alcohol, smoking without keeping their distance, and two complaints to two parties in homes. In addition, the police have evicted three bottles, one of them in the Plaza Virgen del Remedio.

The agents have gone to Los Doscientos Street, where the owner of the house has been denounced for organizing a private party at your homeThe same applies to a tenant, in the street Pintor Lorenzo Casanova, also sanctioned for having another party with several people in his home.

The police have also intensified their vigilance and public awareness of the obligatory mask. In this sense, it has raised 32 minutes during this past day for not making use of the protection with the aim of being able to avoid contagion during the nights and in the places of leisure of Alicante.

As part of the interventions carried out to monitor the restaurant and leisure premises, the agents have sanctioned a premises in Primavera Street, which has been reported by its owner for not complying with the closing time and allowing customers to smoke inside, and the agents have sanctioned two people in the leisure areas at night who were smoking without maintaining the safety distances.

Units Goir, Fox and the Night Service of the Local Police have broken up three bottles in the city before midnight and have imposed six minutes for alcohol consumption, four for narcotic substances and another four for violating the cleaning ordinance.

Among the interventions, a total of five administrative and two judicial complaints have been filed for driving under the influence of alcoholic beverages, two attestations for crimes against road safety, one complaint for expired MOT, one for lack of insurance, 26 complaints for speeding, one for drugs and lack of a driving license with total loss of points, among others. Finally, the firemen of the SPEIS have gone about 23.55 hours to the Bono Guarner street to extinguish a small fire next to some containers