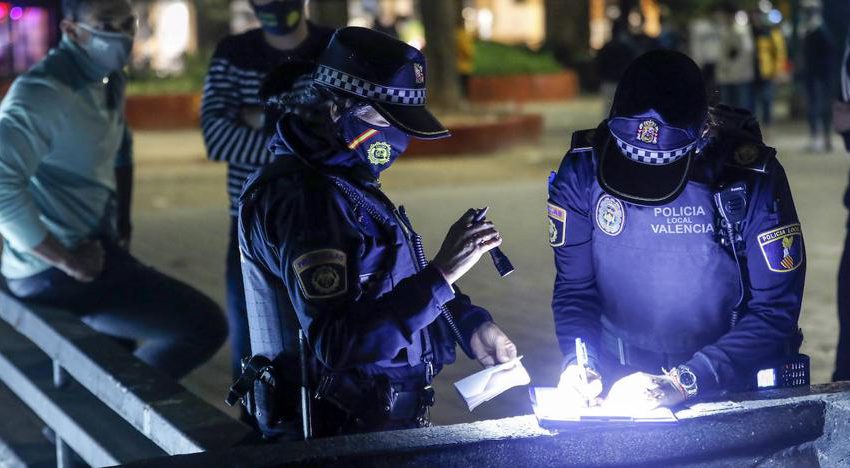 The curfew ordered by the Valencian Government comes into force at one o’clock this morning (from Saturday 24th to Sunday 25th). The measure, which has already been published in the Diari Oficial de la Generalitat Valenciana (DOGV), is the ban on going out from 00.00 to 6.00.

The regulations include a ban on the movement of persons, wandering and staying on the streets and public spaces for all persons during the curfew. Exempted from this restriction are movements due to travel to the place of work in order to carry out their work, professional or business activities; return to their place of habitual residence after working hours; assistance to health centres, services and establishments or the purchase of pharmaceutical products; assistance and care of the elderly, minors, dependent persons, persons with functional diversity or persons who are especially vulnerable and “force majeure or situation of need”. This restriction of mobility is included in a resolution of the Conselleria de Sanidad that also restricts social gatherings and limits the number of people that can be brought together.

This was announced by the President of the Generalitat, Ximo Puig, after the meeting held at the Palau de la Generalitat of the Integrated Operational Coordination Centre (Cecopi), with the participation of the Government Delegation, the security forces and the Regional Minister of Health, Ana Barceló, and the Regional Minister of Justice, Gabriela Bravo. “It will be an effort, we know. But what is the alternative? We know it too well. And we don’t want it”, said the President of the Generalitat.

Puig pointed out that the Consell and the Advocàcia de la Generalitat consider these new measures to be “ideal, because they restrict traffic or the time spent on the streets”.

“They are necessary, because there are no more moderate measures for this purpose so effectively, and they are proportional, because the time slot chosen to limit movement has more benefits for the general interest than harm to conflicting goods or values,” he has argued.

The new restrictions, Puig said, pursue the “primary objective” of “protecting health”.. “The cases detected this week in the Valencian Community have doubled those of the previous week. That is why we consider it urgent to reinforce the measures that stop the spread of the virus and protect health”, he added.

The president has insisted that it is “imperative that we avoid the concentration and wandering of people in the night time zone where bottles and private parties take place in private homes”The reason for this is that two out of three outbreaks have a social origin, with a high incidence of unregulated nightlife.

Puig also reported that the Generalitat is going to ask the Government to declare a state of alarm, as this is the “most useful” legal instrument for tackling the current difficult situation from the point of view of unity of action and co-governance.

These new limitations are aimed at slowing down the spread of coronaviruses that only in the The last five days add up to 4,469 new positives in the Comunitat ValencianaThe number of people admitted to the ICU was increased by 143 to 808 and by 19 to a total of 125.

The exception to being able to circulate on the public highway will be for those who go to a hospital for a health emergencyIf you have a child, go to the care of a dependent or a person who comes to your work place.

Restrictions on mobility and on the number of people who can be together are particularly related to leisure and social relations. The aim is to put an end to the botellón (drinking) and private parties, since nightlife establishments have been closed to the public since mid-August.

The epidemiological situation of the Comunitat Valenciana is less bad than that of most of the autonomies. However, the increase in infections following the bridge of 9 October, with an increase in the incidence of the virus of a 45%, the increase in the number of hospitalised patients on the ward and in the ICUThe fact that the virus has been so widespread in the region, has pushed the regional authorities to try to anticipate the behaviour of the virus. “These mobility restrictions are a response to epidemiological studies, and have nothing to do with politics, since the main objective is to protect the health of the entire population,” said Health Minister Ana Barceló on Friday.