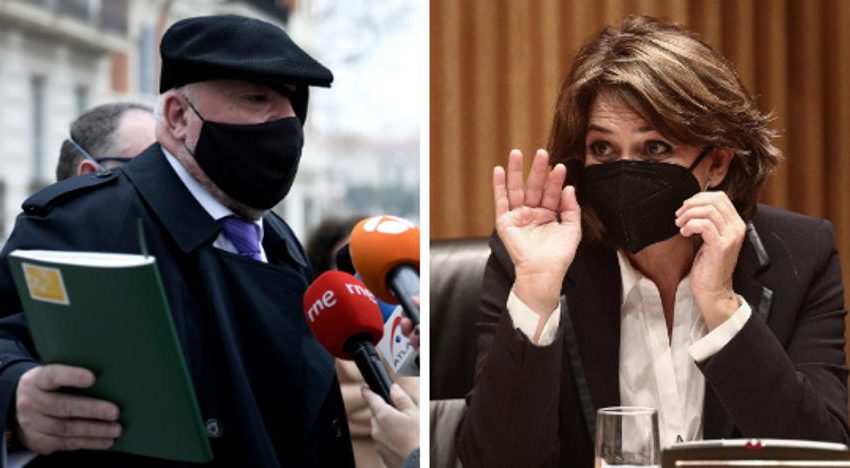 The attorney general of the State, Dolores Delgado, continues in the eye of the political and judicial hurricane. To the marking that has imposed United We can to give explanations in Congress about his meeting with the director of the digital ‘OK Diario’ in a flat in Madrid, shortly after learning of the release of José Manuel Villarejo, add the references that appear in the summary of the ‘Tandem case’ on the relationship between Delgado and the retired commissioner.

The cause collects at least two direct annotations on this link in an agenda intervened to the accused after his arrest in November 2017. Specifically, they are from May and July of that year, and in one of them Villarejo highlights the “high level” of complicity with the then prosecutor of the National Court. “Very determined that I give you data on terrorism. High level of complici” (it is understood ‘complicity’), Villarejo recorded after allegedly meeting with Delgado.

Similarly, the summary that instructs a court of the National Court includes two audios released in 2018 about one more meeting that took place nine years earlier in a restaurant in Madrid. In that appointment recorded by Villarejo was also the current partner of the attorney general, Baltasar Garzón.

It was the meal at the Rianxo restaurant in Madrid recorded by Villarejo and in which Delgado was baited with Marlaska.

Villarejo notes in May the meal of another imputed commissioner, Carlos Salamanca, with “Lola”, Garzón and Judge Andreu.

“Very determined that I give him data on terrorism. High level” of complicity, Villarejo recorded in his diary in July.

Precisely, the ex-judge is the owner of the apartment in the center of Madrid where Delgado and his number two, Álvaro García Ortíz, met last Wednesday with the director of ‘OK Diario’, Eduardo Inda, and his deputy Manuel Cerdán. A medium that has disclosed recordings of Villarejo and that, according to United We can, acts in collusion with the retired police command, as would demonstrate their agendas, to which this newspaper has had access.

The information of the meeting was disclosed by the digital ‘Contexto’ and has not been denied. What’s more, the official social media channel of the Attorney General’s Office on Thursday broadcast an interview with Delgado conducted by Inda’s medium to step out of the rumors and justify the meeting after the announcement of Villarejo’s release from prison. As an anecdote, in that news the head of the Public Ministry appears in a photo with a white mask and in the video of ‘Context’, which hides behind his escorts after leaving Garzon’s apartment, he wears a black one.

In this vicious circle would include another not minor element by the possible conflict of interest in which Delgado would incur: Garzón is the defense lawyer of several investigated commissioners who worked with Villarejo in his parapolice operations. In short, that the partner of the attorney general has a direct interest in the instruction of the cause.

The Association of Prosecutors, majority in the career, wondered precisely about the compliance of the code of ethics by the head of the Public Ministry after learning of the meeting with Inda. Another issue that has not gone unnoticed now is the abrupt departure of one of the two prosecutors of the ‘Villarejo case’ last October. With the unanimous endorsement of the Fiscal Council (advisory body of the Attorney General), Delgado refused to grant a fixed place in Anticorruption to Ignacio Stampa and left him out of the case after being questioned for his closeness to the lawyer of Podemos, party personado in the cause of the National Court.

In September 2018, after the dissemination of the audio of the meal with Garzón, Villarejo and other diners by the digital ‘Moncloa.com’, the then Minister of Justice described that publication as an “attack” on the institutions of the State and the Government. And he assured that the sense of those audios was manipulated. “The recordings are pasted, cut and edited,” he said at the time, despite which he was reproved by Congress.

A week before giving these explanations, Justice issued a statement in which he claimed that Delgado had not maintained a relationship of “any kind” with the retired commissioner in his time as a prosecutor, although later reduced it to the “professional” field. “I with the Villarejo lawyer I have never had relationship and with the Villarejo police only three meetings,” he added. Those occasions were three meals: a first, in which “they greeted each other”; the second, to which the 2009 audios belong; and the third, in mid-2017, was organized by Garzón.