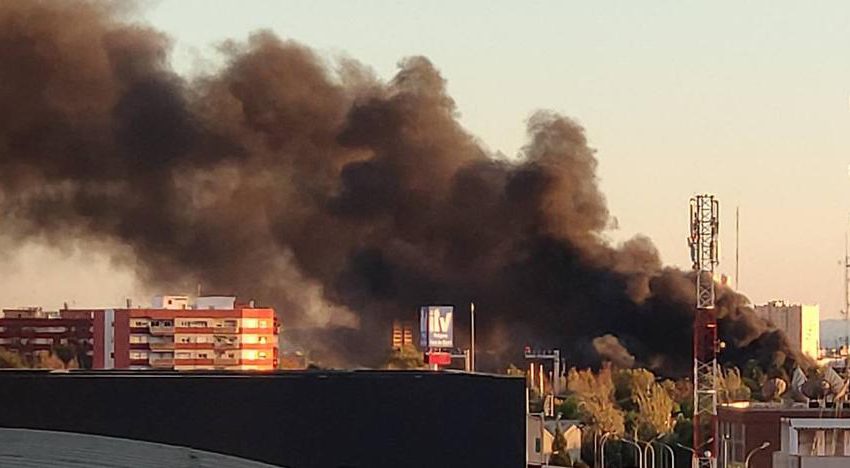 A spectacular fire declared in the south garage of the Municipal Transport Company (EMT) on Saturday affected a score of buses causing a column of smoke visible from different parts of the city. Beyond the damage caused and the effect on traffic and the service of the Cercanías, there was no material damage to be regretted.

The fire was detected around 4.45 p.m.based on the notice received by the Valencia fire department, and was controlled around seven o’clock in the evening. The scene left by the fire was Dantesque, with a succession of blackened bodies, with broken windows and tires and no recognizable interior elements.

Pending the outcome of the investigation, one of the possibilities being considered is that the flames will be initiated by the car explosion parked in the area where the gas buses are located, extending to the rest of the units. In the videos to which LAS PROVINCIAS has had access, you can see columns of flames projecting upwards, typical of the combustion of this hydrocarbonThe company’s technicians went to the garage.

“You heard explosions and you saw wheels blowing off and a column of gas coming out with force,” said a neighbor

The plume of smoke attracted the attention of dozens of curious onlookers from San Isidro district who approached the police cordon, located 500 meters from the affected area. And many residents of the Gremis and Mariano de Cavia streets went out on balconies and rooftops to follow the evolution of the flames. In fact, on the latter, the local police urged several residents to protect themselves in their homes so that they would not be affected by the smoke. The burning smell stayed in the area all afternoon.

“We’re very scared. You could hear explosions, you could see wheels of burning buses that were flying out and also a column of gas coming out strong,” he explained Lara Civeraone of the many eyewitnesses.

“When we saw it we approached the subway stop but we couldn’t be there because of the smoke, It was very annoying in the eyes“, explained a couple of teenagers who stood on the corner of the two streets mentioned, separated from the garage by the train tracks. “You could hear them multiple explosions in a row,” added a girl from the same group.

As reported by sources at the municipal fire department, the flames burned 16 buses completely and one partially, while six others were also affected. The South, West, Campanar, North and Historic Center parks were involved in the extinction work and an ambulance was sent to the garage, although no attention was required, according to the Emergency Information and Coordination Center (Cicu). The police presence was notable, with several patrols from the local and national forces controlling the security perimeter and access to the premises, and agents from the Scientific and Judicial Police to take charge of the investigation.

The mayor also went to the area Joan Ribó and the Mobility Councilman, Giuseppe Grezzi. “It’s a major fire but no one has been affected which is a great joy. They’re old buses, most of them were going to be renovated next year and at no time has the operation of the EMT been affected, nor will it be affected”, said Ribó, who also explained that the vehicles had their insurance up to date and had passed the ITV, before giving the provisional figures for the units affected (he spoke of 16 burnt and six affected).

The mayor also noted that the cases are being investigated by the National PoliceHe said it could be due to an initial explosion and that the flames spread “very easily” because they were gas buses, according to Europa Press. Grezzi said the same thing. “The problem when they are in a garage, if they are next to each other and there is a spark or a fire, more so if they are gas buses, is that it spreads easily,” he said. Also, just like the mayor, was pleased that the safety and coordination protocols worked.

The mayor also referred to the life of the vehicles, pointing out that some were “quite old” and that in some cases they had been in use for a long time.up to the age of 22. Finally, he highlighted that EMT workers volunteered to help and move buses to avoid being affected by the flames, hence he appreciated the “commitment to the public thing of the whole staff”.

The opposition asks for information

For his part, the councilman from Citizen Protection, Aaron CanoHe noted the rapid action of the fire brigade, which prevented the fire from becoming “bigger”. To get an idea of what it could have been, it should be remembered that the average price of an EMT vehicle is around 300,000 eurosaccording to sources consulted by THE PROVINCES.

The incident received a prompt response from the opposition parties. The spokesperson of the PP, Maria Jose CataláHe said they would ask for a report on the causes of the fire, “as well as the impact of this new misfortune on the service.

His counterpart from Citizens, Ferdinand GinerThe same is true for the other two. “We will continue to be very attentive and will request reports to find out the reason for this mishap and the material and economic damage it will cause,” he said. In addition, he was critical of Ribó’s statements regarding the age of the vehicles and their planned renewal. “It seems that we have even been lucky and we have to congratulate ourselves and applaud for it. More common sense and better management,” he said.

The fire has burned a total of 16 vehicles and affected seven others. /
Hector Lopez Torres

In social networks the messages conveyed by both Grezzi as for Ribó They followed the same line: while they appreciated the speed of action by the bodies involved and were pleased that there was no material damage, they also played down the importance of the incident, talking about various vehicles affected and insisting that the network was able to function normally.

The shock among residents was exemplified by the words of the president of the San Isidro neighborhood association, Jose Luis Ceballoswho claimed that the episode was “terrifying”. “We’re still scared,” he explained. In addition, he recalled that the entity has already spoken out against the location of the garage because of its proximity to the farms. “Nothing has ever happened, but it has happened,” he added. In this sense, the association shuffles to ask for a relocation of the facilities to be located outside the consolidated urban area. “We are going to raise it in the revision of the general plan when the time comes to tackle the functional area of San Isidro,” he explained.

Diego Varea is another neighbor who, along with family members, lived through the fire. “There were seven loud explosions, a lot of smoke that made it impossible to see, and a lot of police and firemen,” he said. Like other residents, he went up to the roof to check the origin. Y the first thing he thought of was an attack. “There was fear, of course. The whole neighborhood was covered in smoke,” he added.

Finally, from the Union of Consumers of the Comunitat they pronounced in the sense that the mishap “does not affect the service and the frequency of the different lines, causing problems to the users”.

The fire at the EMT’s depot in the San Isidro district also had an impact on rail traffic and road circulation. Thus, in the latter case, the Guardia Civil (which assumed control of traffic on this motorway in 2017) closed the slow lanes of the V-30 and the accesses at kilometre 7. The large column of smoke was visible for several kilometres.

In addition, according to the website of the Directorate General of Traffic (DGT), there was irregular traffic on the highway while the event occurred with small delays along three kilometers in the direction of the by-pass.

In the case of the railway, the proximity of the tracks and the San Isidro station to the facilities forced Renfe to remove the C-3 suburban train (Valencia-Utiel) from circulation between the Estación del Norte and Aldaia. According to the operator, alternative transport was provided for the passengers affected. One hour later, traffic was restored between the two municipalities. The C-3 currently only has 15 journeys on Saturdays. This road (the old connection with Madrid) is also the one used by the regional governments of Cuenca and Aranjuez.

Ferrocarrils de la Generalitat Valenciana (FGV) was also forced to take action when the fire broke out. According to the entity’s sources, the metro lines 1 (Villanueva de Castellón-Bétera), 2 (Torrent Avinguda-Llíria) and 7 (Airport-Maritime-Sawmill) did not stop in San Isidro in approximately 45 minutes. Likewise, as a precaution and due to the dense smoke, the underground station, which is located in Campos Crespo Street, was evacuated.

This building has a direct connection to the Adif Valencia-San Isidro station, which served as the head of the C-3 and C-4 suburban lines between 2008 and 2015 due to the cut-off of the high-speed line between Madrid and Valencia. The connection between San Isidro and Fuente de San Luis allowed the trains to return to the Estación del Norte.