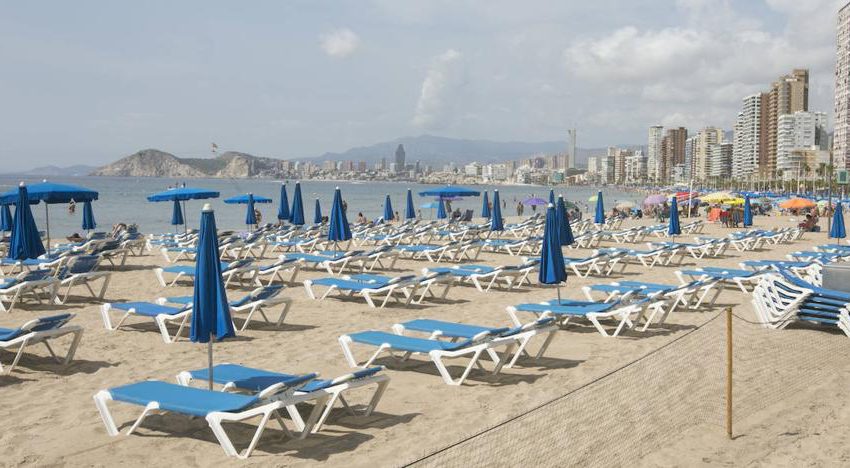 Tuesday, September. 11 a.m. The Europa Avenue takes us to the same front line of the Levante beach. In front, the sand is almost deserted. To the right and left, at least five free parking spaces where you can park your car a stone’s throw from hotels and restaurants. «I got there and left the van at first, the first thing I’ve ever seen. This doesn’t look like Benidorm, or even Alicante,” exclaims the Galician José as he takes Estrella by the arm. The bump that the tourism pandemic has meant for the entire Community has its grandiloquent mirror in Benidorm. The jewel of the Costa Blanca and one of the empires of national tourism is staggering. You only have to look at one piece of information to see for yourself. It was pointed out by the Hosbec employers’ association and confirmed on the spot: of the nearly 150 hotels in the city, only a dozen remain open.

The tip was the cancellation of the Imserso’s trips. “Not a single hotel will be open in the village, they all lived there, it was 80% of their clientele”. What predicts Ricardo Sanchez, director of the hotel Cimbel, one of the most historic in Benidorm, half a century of history, one of the few open and lucky in the midst of the storm. “Now we will be at 50%. In August we reached 70. People even haggle over the price, as if this were a bazaar! But we’ve got up to 40 people out of the Erte,” he explains as he looks at the busy beachfront pool. He keeps gesturing behind a mask with the Spanish flag. “My head is going to explode, this is changing all the time. If you tell me to talk to you about the Pilar bridge, it’s asking me to talk to you in the long run. This tourism thing has become ‘here and now’; you book almost everything at the last minute”.

Tuesday. September. 12 a.m. The adjective ‘desert’ is too small to describe the state of the hammocks on the sand. Put one of them together and there’s a free newspaper dated a week ago. In barely 300 meters, the first line speaks. A construction fence closes the door of the pub ‘The Jungle’. Some chains do the same in ‘Copacabana’, with ‘1 litre of sangria at 9.50’ as the only sign in Spanish. A sign of ‘for rent’ in the restaurant ‘El Tocca’. The natural yoghurt machine of ‘Yoggo’ can be seen dusty behind another sign of ‘se traspasa’. Automatic doors do not open in the Brisa Hotel. Closed. Only open for post and parcels’. Next to it, a sign offers ‘two beers for one’ as a hook in a British pub in Girona street. The claim, the final of the UEFA between Sevilla and Inter at the end of August. Time seems to have frozen over in Benidorm.

The economic pump is not only noticeable in a giant today with feet of mud. The shock wave is reaching the entire Community. And threatens to ruin the region. Marga is sneaking a cigarette to the doors of The Crown. Next door, Ana does the same. The first is the head chef of a hotel that is closed today. The second is an employee of the pub at whose door they kill time. The blue area, usually crowded, is empty. No one passes the door. “At this hour this place should be full of ‘guiris’ devouring pints and leaving their backs to the mechanical bull,” said Ricardo Sánchez moments before from the hall of the ‘Cimbel’. “This is a disaster not only for Benidorm. In nearby towns, such as La Nucía or Polop, 80% of the people work here in the hotel industry. The British quarantine has killed us,” he laments. And Girona Street is still deserted. There are about fifty places listed there, all of them for foreign visitors. Only three are open. And empty. Even Kentucky Fried Chicken hasn’t held out. “Temporarily closed”, reads a sign, optimistic.

Jose and Antonia. Tourists of Galicia. “This is a pity”, acknowledges the couple from La Coruña in the area of Levante beach, where they are over 60 years old. / Damien Torres

A nooner. The Levante beach looks emptier and emptier. José López is swinging on his heels as a way of killing time on the terrace of ‘Los Gemelos’. The manager of the restaurant, an Ecuadorian, “34 years in the hotel business” and three children on his back. “I’ve never seen anything like this in my life. There is nothing. Now we should be full, and look“He hurts as he points to a table with four young French women, the only one of more than 60 on the premises. “Just opening the shutter costs about 2,000 euros a day in light, supplies… And there’s no way that box is made. In the end the owner earns more money closing than opening. They’ve already gone on strike, and at the end of the month, more will go…He admits, “I’m not a man,” and as his eyes get wetter and wetter when asked about his three children. The noose is tightening on tourism. And the measures to avoid suffocation end up being desperate. Four days full board for 60 euros. This is the offer of some hotels.

-Everything included. So it’s impossible that they’re not losing money, but money comes in…

Marga, the veteran head chef, explains it. Something is done with the distressed offers. From Ballymena, in the north of Ireland, Clare Dustin did not hesitate to travel to Benidorm. The comparison of British tourists arriving this year cannot be compared with the 2.8 million who land in the Comunitat each year. The forced quarantine set by the histrionic Boris Johnson guilotined hopes. But some have survived. “It’s cheaper and quieter, so what’s the problem?” Clare explains. Behind her, her husband’s skin, bent over on a terrace in front of the beach, has already reached the red cooking point. “Everything’s great at the hotel. Fear of the coronavirus? None. Fear of quarantine? When I get back, 15 days at home and everything’s fine!” And the waiter almost applauded when he heard it.

Benidorm has a floor plan that is close to 150 hotels. Not even half have opened in summer, around 70. “Of the million people who came, will have reached a quarter”

“I have 50 reservations from Madrid. Suddenly they call me and tell me they’re not coming. Every day you meet with the hotel bosses and start over.”

Jose is a restaurant manager and spends the morning waiting. Marga is a chef with years of experience and she sees how hotels are now launching offers… to lose money

“Just opening the door costs 2,000 euros. And now we don’t do that box every day. You have to understand the entrepreneur. At the end of the month, more unemployed colleagues”

The national tourism has been the lifeline. “Many people arrive without reservation, directly at the counter, the unseen,” its director says from a sofa in the Cimbel Hotel, while controlling everything by jumping from here to there with his eyes. Eighty percent of his clientele is national. A few drops of sweat pearls on his forehead when asked about autumn and winter. He wipes them off with the back of his hand. “We depend on the Belgian, Dutch market… If there is a quarantine, it will be very difficult to hold out”, he confesses before adding that this summer he has not uttered the word “holiday” and tiptoed through the expression “closure”.

Clare Dustin. Irish traveller. “Everything is less expensive and quieter,” one of the few British tourists not afraid of the Covid. “When she returns, quarantine at home.” / Damien Torres

Two in the afternoon. Levante Beach. “There’s no one left here!” Eusebio cries out to the wind from the coast. The tattoo of a Japanese letter on his right shoulder barely stands out on his torrid skin. And he stays in one of the enclosed plots under the sign ‘over 60’. He has a choice. There are other plots for families and for children. José and Antonia also turn into one of the squares for retired people. “We’re from Orders, from La Coruña. I mean very bossy,” he jokes. “Fear, no. Respect, a lot,” he answers very Galician when asked about the Covid. One of the great assets of the Community, nature, the climate, ends up winning in this battle against the apocalyptic pandemic. “I have a bad back, the cold in the north is not good for me. It’s 14 degrees there now. Here, look…”, and points to the sunny, lonely beach. And Antonia smiles at him in the towel. But the economic climate in Benidorm can’t take any more of the jolts. On the ground it is represented by Ana Maria, born in France half a century ago and here a dozen years later. Cosmopolitan wisdom that reinforces her to sing her ‘requiem’: “This is sad. You used to see a Dutchman playing pétanque here (he points to the beach), a British couple there (he points to a closed café), this is full (he looks at the water-ski stand with the clerk ‘whatsapping’). It makes you want to leave…”. Meanwhile, the business lung of the city called for Tuesday a demonstration to demand that the Ertes tourist expand in the region. Madrid still leaves the flower. From the Community is launched an ultimatum. “We will go to Brussels if they do not respond. We must save Benidorm. It’s Erte or death».

Ultimatum in the city

The business community has called for a demonstration this Tuesday. They are asking to extend the Erte for the tourism sector. “Erte or death, save Benidorm”

“80% of the villages in the region are employed here in the hotel business. It’s not just a local bomb, it condemns many people to an uncertain future.

“The end of the Imserso’s travels means the government is giving us the go-ahead. It’s impossible for the town’s hotels to stay open, they depend on it.

Jose Lopez. Cafeteria manager. Noon. Only one table with customers in the heart of Levante. “At the end of the month a few colleagues go on strike,” he laments. / Damien Torres