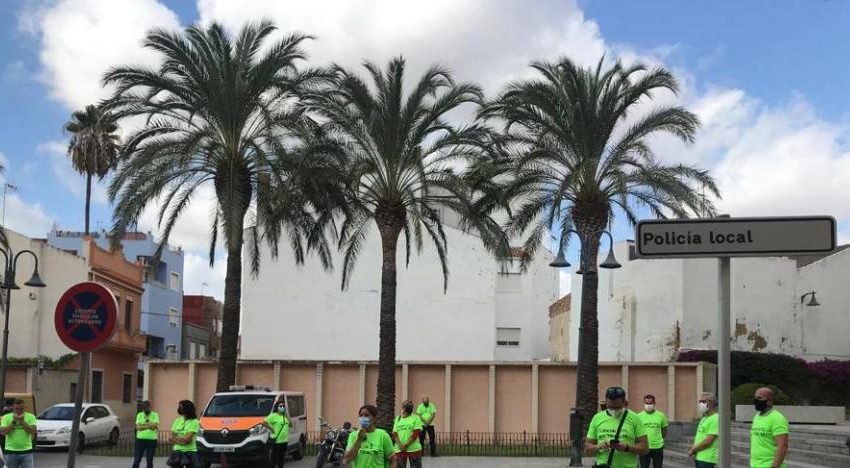 The staff of the Local Police of Catarroja has concentrated this morning at the gates of the checkpoint to protest with a whistle for the lack of troops and working conditions in a “toxic climate”, as they say. The protesters wore T-shirts with the slogan ‘Fair valuation now’.Meanwhile, inside the building, the town hall celebrated the ceremony of the awards for October 9th, among which were the agents of the local corps.

The cops denounce the “decline” in troops that has occurred between the places that have not been covered by retirements and the casualties that cause that “we cannot guarantee the security of the citizens”. “A town like Catarroja with almost 30,000 inhabitants only has one patrolThey explain that “the number of people who can be treated is very high, when 10 years ago it was three, and this means that on many occasions services cannot be provided”. In addition, they warn that as a result of this situation, the agents “have to double their shifts, with the extra workload that this entails”.

Another problem is payment for extraordinary services that the city still owes, “a year late even though they should be paid monthly”. They therefore point to the “legal uncertainty” they face, which adds to the “wage gap” between them, as some are considered to be level 16, the lowest, and others level 21, “working the same but earning more”.

They also warn of the lack of uniformity, the absence of a municipal vehicle depot and the poor state of the municipal fleet. Because of all this, the staff requests to reach an agreement with the city councilThe Commission is also concerned about the fact that the European Commission has not convened the negotiating table since May and that it accepts the conditions that were presented with the approval of the trade unions, with the appropriate assessment of the jobs.

“This is the first time in history that the local police have made an act of protest but we can’t do it anymore. This is the beginning of a war“Some of them point out that, in addition, they make reference to the stress leave, the complaints for “harassment at work” and the “toxic work climate” that makes “nobody wants to come to Catarroja”.

After the institutional ceremony, the mayor, Jesús Monzó, addressed the demonstrators who “turned their faces around”. “It was a gross disrespect concentrate when we are doing a tribute to the body and other entities for their work on the pandemic,” Monzó said. The mayor also noted that a financial reward for staff.

Similarly, he said that the executive “continues to work within the deadlines that we communicated to them. “At the beginning of the year a modification of the working day was agreed with the unions. They want to work less and get paid more but we cannot consent to it,” he explained. Therefore, “alternatives are being studied to assess this reduction in hours.

“Negotiate is negotiated at the table not with acts like this one,” he added and finished by pointing out that “in the concentration there were agents who are on leave and on staff from other municipalities.

For her part, the Deputy Mayor, Lorena Silvent, who shares the council with Monzó, insisted that “we are in a process of negotiation” and that “we’re willing to solve as many as we can, because we know there are endemic problems.