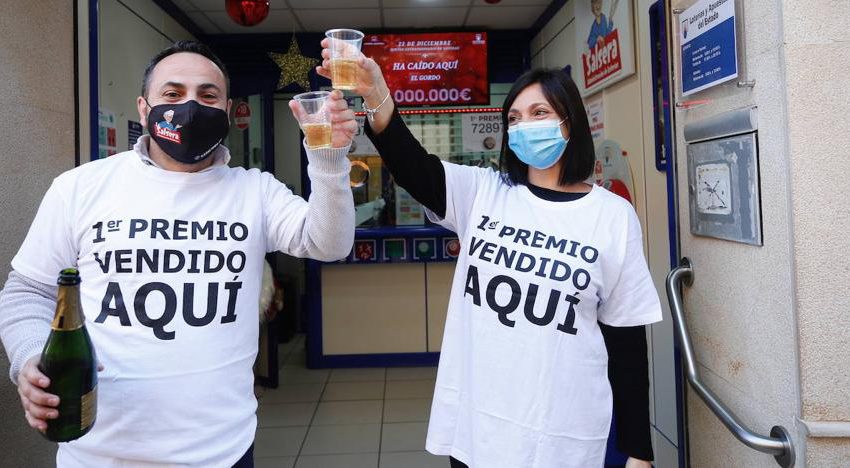 In the year of the anguish of the pandemic, in which health is the best prize, the Christmas Lottery yesterday brought a balm of illusion in the Comunitat. The balls of the special draw sent the region 137.5 million euros. The desired Gordo came lightweight to distribute 1.2 with only three tenths in Xàbia, Oliva and Alfara del Patriarca. The really big one arrived with the second and its 111.2 million for the Valencians, with epicenter in Gandia and Pinoso. They added the good pinches of the quarters, especially in Faura, and three fifths quite splendid for our land. Manises is consecrated as the people of eternal fortune lottery with five prizes distributed from their windows. The draw leaves the third largest amount of money in prizes this decade in the Comunitat.

It was not like in other years: the Royal Theatre empty of public and the children of San Ildefonso singing almost alone. The crisis was felt with a collective expenditure on chance 11% less than in other years in Spain. In the Comunitat we have left 370 million in Christmas lottery, an average of 74 euros per inhabitant. But the virus couldn’t cope with the dreams and the champagne was uncorked, another year, here and there, all over the region. In spite of everything.

After a small ball jam, the bass drum rolled at 9.10 a.m. The start was contained in fortune for the region and Gordo, stingy compared to other years. The ‘in crescendo’ of millions began at 1.09pm, the turning point. The second prize, 06095, meant an earthquake of 111.2 million for the region. And the administration of the day, the number 7 of Gandia, gave away no less than 56 million in La Safor. The jubilation took possession of graceful people like Bea, who runs a bar in Benirredrà: “We have had a very bad time because of the pandemic and we needed to end the year with some joy.

The fate of the second one also walked to Pinoso, with 36.2 million distributed among its people. From the concern of their neighbors after leading the rate of coronavirus infections in the region to the joy of the important prize. Crevillente, Elda and Callosa de Segura were other graceful towns. And, of course, the 3 of Manises, with another very succulent Christmas bell: 1.2 million thanks to a series sold. It was the biggest of yesterday’s five Christmas prizes that add to its very lucky history.

And if the second one tasted like the first one, the Fat Man was a second one. At least for the Valencians. The most desired one was a bit sleepy and unkind to the Comunitat. There was only a party for the three holders of three tenths sold in Xàbia, Oliva and Alfara del Patriarca. Together they took away 1.2 million.

The story of the third prize is linked to the administration of the shopping center Carrefour of Torrevieja, with a series sold from 52472 and half a million euros distributed. The establishment had already distributed a little before 60,000 euros with a whole series of the first fifth, the early bird prize.

The first of the two fourth prizes barely kissed the Comunitat with 60,000 euros. But the second, sung by the children at 12.40 pm, unleashed madness in Faura, Meliana, Almàssera and Manises. In the small town of Camp de Morvedre, with just over 3,500 inhabitants, jubilation erupted in the administration 1 of the street Major, known as Sants Joans. There, 31 series of the winning number were sold. Or, what is the same, a shock wave of 6.2 million euros.

One of the winners is the orange farmer Juan Antonio Pozo. “I won 22,000 euros,” he celebrated. “The money is to pay off some debt and also for my grandchildren’s Christmas presents.” Meliana is not far behind either, caressed by 5.8 million. Or Almàssera, with 3 million distributed. The money for the two rooms also came from the windows of Loteria Manises.

For the Comunitat the echoes of fortune began to resonate just nine minutes after the draw began. The first fifth, the impatient 86986, brought 3.8 million to the region. And the immense majority, 3.6 million, went to Novelda by the work and grace of the administration 1 of Emilio Castelar Street. Burst of fortune for the people of grapes, marble and spices. “We have sold everything and it has been very distributed”, explained the person in charge of the administration, Roberto Ramon. “This is a great joy”.

A support for the sick

A large part of the 60 series sold went to the Association of Relatives of the Sick with Alzheimer’s Disease in Alicante. It was the first time that the group distributed a prize of such importance.

The jubilation enlightened María del Carmen Martínez, president and worker of the entity. Among the lucky ones there are ten workers of the center: a therapist, a psychologist, a nurse’s aide… “Come on, give me, it’s your turn this year”, joked Martínez to the lotero when he accepted the blessed 86986. “This disease has a lot of expense and we are glad that it supports the relatives, and more in this year of the pandemic”he said. “This helps a lot on a moral and economic level.

That first fifth was distributed, both in Spain and in the Comunitat, with pinches in the center of Valencia, Torrevieja (with a series sold), Alicante, Torrent or l’Alcúdia. They are some of the 18 municipalities of the Comunitat graced. The administration 3 of Manises also sold one tenth of that fifth.

And ten minutes later, at 9:20 a.m., his second brother, 37023, was born. This one was much more concentrated in Madrid, but he brought some fortune to Vinaròs by way of a refill, with a series sold and 60,000 euros for the enjoyment of his neighbours, thanks to the administration of San Cristóbal.

The last song of joy for the Community was at 1.15 p.m., with the seventh of the eight fifth prizes, 43831. Six million on their way to Valencia. Most of that not inconsiderable pinch landed in Alicante, with the sale of 85 series of the number transformed into 5.1 million for the winners. They were sold in the administration of the Reyes Católicos street. Elche had its share of glory, with 660,000 euros. Lottery Manises disseminated 78,000 euros of this fifth. And this time he was joined by the neighboring administration of Valencia Street, with the sale of a tenth prize. Elche, Orihuela, Villena, Alaquàs, Algemesí or Utiel also got a cut for a Christmas bass drum that eased the pain and wounded pockets. A spark of illusion in a year of nightmares.

With the prize searcher you can know, from the moment you start to draw the balls in the Christmas Lottery draw, if the numbers you play have been won and the amount you have won in case you have won any of the main prizes or the stony one.

See if your number has been awarded

If you want to know which administration sells your favorite number (or any other in particular) for the Christmas Lottery draw you just have to enter it in the search engine of the National Lottery 2020 and find it.

LAS PROVINCIAS offers you all the latest information about the Gordo draw, with the winning numbers, the stones, the reactions, anecdotes and curiosities of the Christmas Lottery draw.