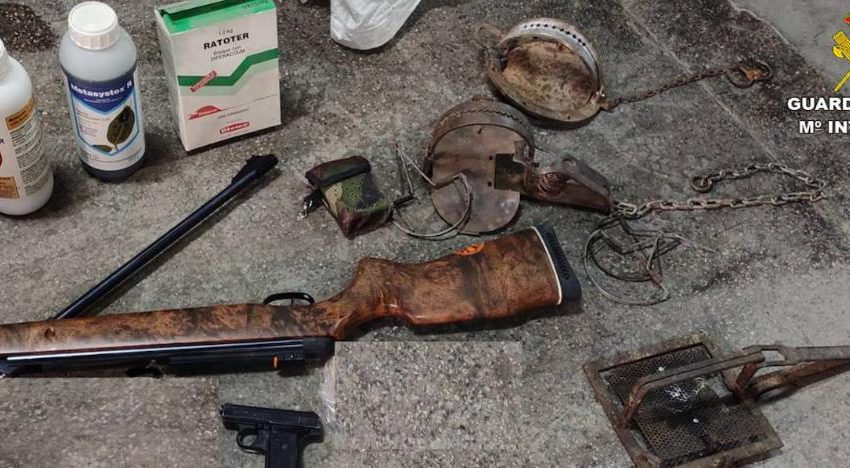 The Guardia Civil is investigating a 76-year-old man in Alcoy as the alleged perpetrator of a continuing crime related to the protection of flora, fauna and domestic animals, by use of poisoned bait that allegedly caused the death of several animals in the region of l’Alcoià.

Agents of the Nature Protection Service (Seprona) of the Civil Guard in Ibi and the environmental agent assigned to the region of l’Alcoià have conducted an investigation to clarify the authorship of several poisonings resulting in death in that region, reported the Armed Institute in a statement.

Officers have located and identified the alleged perpetrator after finding in a garage two canisters containing the substance allegedly used to poison the baitsAldicarb, a pesticide whose possession and use is prohibited because it is considered a hazardous waste and toxic to human health and the environment.

The Guardia Civil intervened with a series of ropes, which were sent for comparison and analysis by the chemistry and environmental laboratory of the Guardia Civil’s Criminalistics Service in Madrid, as they were probably used to tie the aforementioned baits.

Therefore, the agents have instructed proceedings in which this neighbor of Alcoy is being investigated for the alleged commission of a continuous crime related to the protection of flora, fauna and domestic animals, which can lead to a prison sentence from four months to two years or a fine from eight to twenty-four months, as well as disqualification from the exercise of the right to hunt or fish from one to three years.

Also in Alcoy, agents from the Seprona of the Guardia Civil in Ibi, in collaboration with the Poison Detection Canine Unit of the Guardia Civil in Valencia, have intervened a significant amount of phytosanitary products of prohibited use, two cage traps for the capture of animals, 16 different types of traps, two compressed air carbines and a pistol.