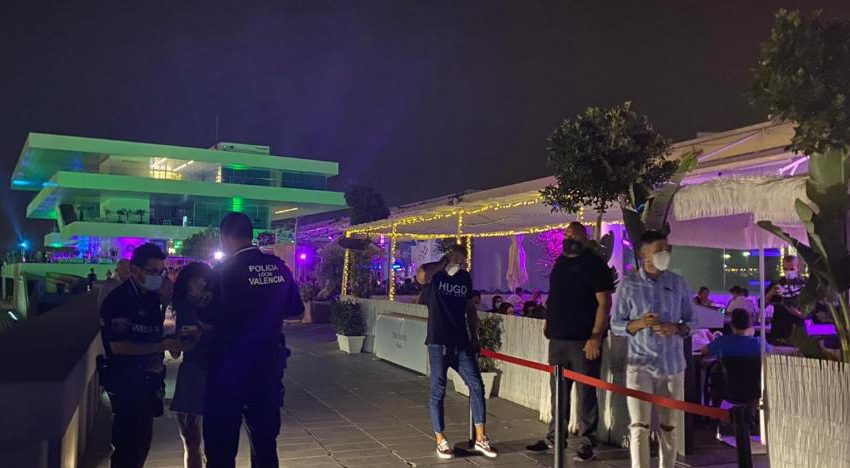 The Local Police of Valencia has put the Marina de València at the epicenter of its nightly performances. It is not a persecution mania, but rather to put the focus on one of the areas of the city that more nightlife venues concentrate and which, being an open enclave, lends itself to wear less of a mask. Since the end of May, agents have been inspecting the premises more than 600 times624, according to the latest data provided by the Department of Citizen Protection. They assure that all the pubs and discos of the Marina are inspected on a daily basis.

«Penalties are accumulated every week. This makes us think that there are people who seem to be making scorched earth policies in terms of nightlife, harming the whole sector: they seem to think that they have to make the best possible financial gain before paying penalties“, said the councilman of Citizen Protection, Aarón Cano, who insisted that they will “refine much more” the coordination with the Autonomous Police, in charge of watching that the Law of Spectacles is fulfilled. However, the councillor insisted that the issue of the fight against Covid-19 is not “a police matter”, but one of “personal responsibility”. “People need to be clear that what is private in this case is public. What happens in your house when you invite five, ten, twenty friends to eat is the same thing that can happen on a bar terrace,” Cano said.

“This can’t be solved by the police. Putting in 47 million fines doesn’t solve the coronavirus problem. The key is to raise awarenessPeople have to understand that it is in their personal attitudes where they put a stop to this because the coronavirus spreads everywhere,” said the manager of the Local Police of Valencia, which has already reported three premises in the Navy, some almost every month since it began the de-escalation, and several times.

In addition, Valencia City Council has inspected 353 terraces since its expansion in June following the state of alarm. This measure, agreed by the City Council to allow hotel and catering establishments to recover some of the money lost with more clients and, above all, with spaces where physical distance could be maintainedThe fact is that the project was not born free of controversy, since the neighbourhood associations suggested that it would be necessary to monitor compliance with municipal guidelines in terms of size and timing of the terraces.

“The Covid-19 problem is not solved by fining 47 million times,” says the Councillor for Citizen Protection

Thus, as explained by the Department of Public Space directed by Lucia Beamud, the intention of the Consistory was to be “far above” the extended terraces to avoid that the wide sleeve that was had with the hotel industry when the de-climbing began became a whole that neither the City Council nor the neighbors wanted, especially in certain neighborhoods like Ruzafa or Carmenwhere the concentration of terraces is greater. In addition, the Treasury Department proposed eliminating the rate of tables and chairs until the end of the year and is now considering extending this measure beyond January 1, 2021 to make the crisis caused by the pandemic more bearable to thousands of bars, cafes and restaurants in the city.

As municipal sources explained yesterday, the council then set up a special inspection plan for terraces putting the focus “on those places with the most volume of terraces”: Ruzafa and the Carmenyes, but also the Juan Llorens area, the promenade, the squares of Honduras, Xúquer and El Cedro and the surroundings of the old Woody’s nightclub. In these areas we have acted in two ways: by inspecting the terraces themselves and checking that everything is correct, maintaining the distances and capacities established by both municipal regulations and the decree of new normality published by the Government, and by informing hoteliers of how they should act. In Ruzafa, 147 terraces have been inspected in each neighbourhood and 92 in Carmen. With respect to the first of these areas, associations such as Russafa Descansa have already reported excesses in the hotel industry in the first weeks of the de-climbing process with respect to noise and closing hours.