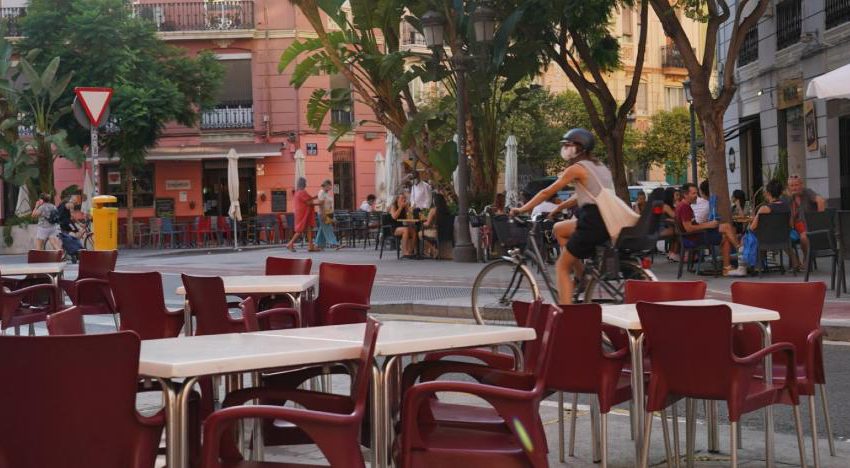 The grace period is over. The duel is over and the Federation of Neighbourhood Associations has stood up to the Consistory yesterday in a meeting with the Councillor for Public Space, Lucia Beamudwhere the entity presided over by María José Broseta asked him to rethink the approval of terrace extensions since the de-escalation is already over.

“We have to sit down and talk because they might give us arguments. An agreement was reached at a time when the de-escalation was in place and we have already passed it. There’s another set of problems and we have to sit down and work it out“, said Broseta. “We can’t generalize, but there are hoteliers who have gone too far, but since they went too far in 2018 or 2019 Others scrupulously comply with the rules. We have to see it and work on it from the leisure observatory,” said the neighborhood leader.

The meeting was also attended by Toni Casola from El Carmen and Toni Plà from Patraix. The former was the most belligerent on the subject of terraces, given that the district where he lives is one where terraces have grown the most, as revealed by the data provided by the Department of Public Space published yesterday by this newspaper: 92 of the 353 inspections carried out on terraces were made in this area of Ciutat Vella, where dozens of premises have chosen to extend their tables and chairs in the street. According to the Valencia Neighbourhood Hostelry Coordinator, only 5% of the premises that asked for terrace extensions received a response during the first week of the de-climbing.

The fact is that the residents are very concerned about the fact that the public space recovered in several squares in the city, such as the Town Hall, is occupied by terraces, as happened in 2016 when the performance was held in María Cristina. However, both the Federation and the City Council came out of the meeting yesterday in good spiritsThis was called to talk about nightlife, but it served, no one can escape it, to temper the relationship between both entities after the announcement that the figure of the mayor would be created at night and that the federation insisted that they wanted the leisure observatory which was approved by the plenary before the election. Not in vain did she attend the meeting on behalf of the Beamud Town Hall, which is the president of the La Torre residents’ association and mayoress of the same town.

Beamud expressed the government team’s “concern” about the current situation of the spread of the pandemic “because we see that there are more and more cases of Covid-19 patients,” he explained. For this reason, “we want to promote a series of measures that are always based on dialogue and consensus,” added the mayor, along the same lines that Mayor Joan Ribó indicated a few days ago, on the importance of promoting initiatives to prevent and stop the spread of infections in order to protect the health of citizens and to facilitate the sustainability of economic activity.

The mayor stressed “the importance of implementing the agreement reached in February 2019 on the Leisure and Tourism ObservatoryThis is a very important observatory because it can lead the model that we want to have of leisure tourism, to be able to start a series of very important initiatives for the city of Valencia”.

During the meeting, Broseta stressed the importance and need to achieve a great agreement on pedestrian mobility and public space in times of coronavirus, with the aim of clearing the sidewalks of terraces as much as possible, if necessary by encouraging their location on the road, even if this means eliminating some of the blue zone squares: “The space of the ORA is not immovable and if a terrace can be lowered onto the road to free up pedestrian space on the sidewalks, this must be done because the important thing is that the terraces do not limit the pedestrian space“, said Broseta. Neighbors also believe it is necessary to open a debate on nightlife safety aimed at studying alternatives to reduce the risk of coronavirus outbreaks. The nightlife observatory, they explained, will begin to operate after the holidays in September.