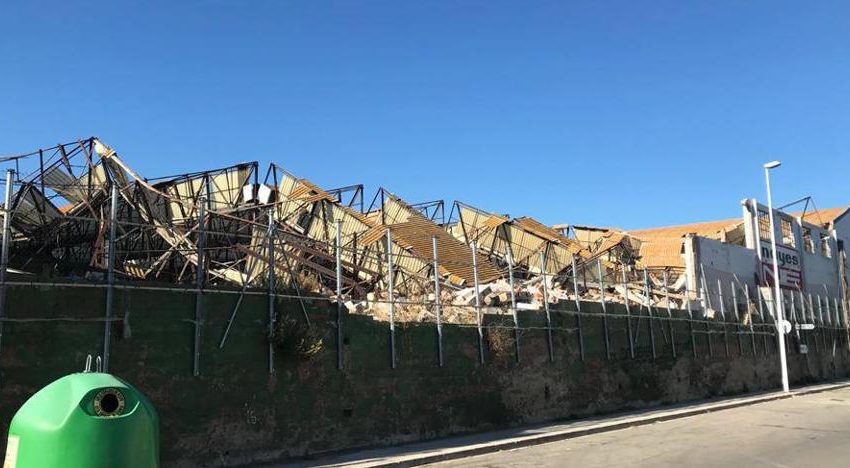 On September 16th, the Mayor of Moncada, Amparo Orts announced on her social networks that in a few days the owners of the ship in Nayes “will start the demolition of the entire construction, assuming the full amount of the work which amounts to approximately 500,000 euros”. However, the days are passing and the neighbors are still worried because more than two months after these statements, “there is no movement of works in the facilities”.

The problems are almost the same as a year ago when one of the ships collapsed due to the theft of the structural pillars and ended up collapsing occupying part of the public road. Although what worries nearby residents most is the presence in the environment of a “yellow dust” which they attribute to the asbestos in the ceilings. “I spend all day dusting the tables,” they say at a nearby restaurant. According to them, there is nothing left of the plastic that was installed to prevent the particles from going beyond the limits of the enclosure, the remains of which “we have been sweeping since it flew away almost as soon as it was put in place in January”.

The old factory “it’s scary and it causes concern”explains another neighbor. “The noises at night are so loud that sometimes they don’t even let us sleep. The plates move with the wind and it sounds like they are going to collapse again,” he adds. The facilities, which have been declared in ruins, are not indifferent to those who pass by on the street, with an image that degrades the area.

However, they are more relaxed since “the drums with toxic materials were taken away” after a spill on the public highway that caused damage to vehicles. Even so, they are missing information from the City Council about how the demolition is going to be done “because there is a lot of asbestos in the roofs and walls”.

This 18,000 square meter old factory, located in the Virgen de los Dolores neighborhood, was vandalized and robbed for years due to its state of abandonment, until one of the ships finally collapsed on November 3rd last year. The Town Hall acted by opening a file on the property, four banks and a real estate agency, with a proposal for a sanction to proceed with the dismantling and demolition of the entire construction.

The document declared this ship to be in imminent ruinThe building is attached to the 7,200 square metre office module, which collapsed due to the wind and which had a second collapse after the work carried out by the City Council. It also called for the installation of a 400-gauge plastic tarp to protect the fallen part containing fiber cement, although the solution was not very helpful and did not withstand the first wind storm.

Nevertheless, after a year of negotiation With subsidiary actions by the City Council, the owners of the property will proceed to execute the order and assume the full amount of the work, which amounts to approximately 500,000 euros, according to the mayor.