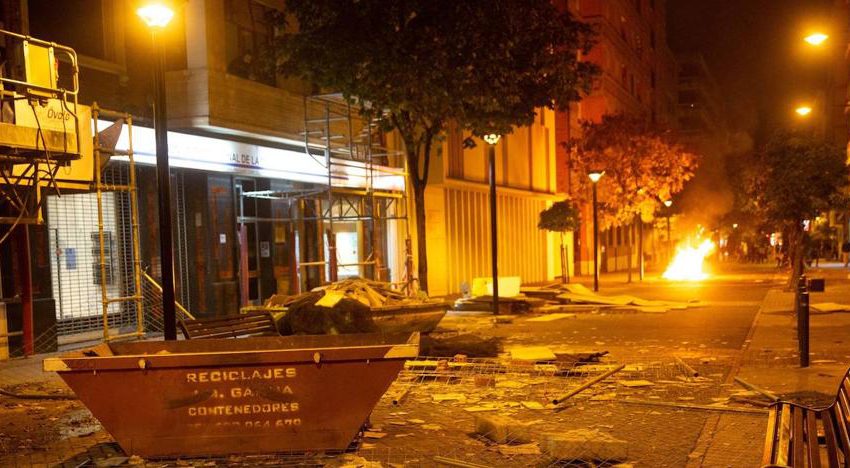 The serious incidents that have occurred in various provincial capitals since last Friday due to the implementation of curfews have decreased in intensity after the weekend ended – although this Monday was a holiday in six communities – and the police force was expanded in the center of the cities.

The latest clashes were recorded on Sunday night in Logroño, for the third consecutive day, and Leon. Most were groups of young people who destroyed street furniture and damaged vehicles, although no acts of looting were seen as occurred on the first two days of vandalism.

At least five people between the ages of 16 and 23 were arrested in the Riojan capital for public disorder after the sit-in at the headquarters of the Government Delegation and the Regional Executive. The police also handed over a 13-year-old Spanish minor to his parents as a co-author. In León, there was one arrest and 16 identified.

In Madrid, the duty judge released 25 of the 33 detainees on Saturday night on charges on Monday – the rest will go to court on Tuesday – because of the unrest in the centre of the capital. However, they will be investigated for crimes of public disorder, assault on authority, damages and others. Likewise, 18 of them will have to appear in court every 15 days as a precautionary measure.

Among those arrested are two minors, who have been transferred to the Juvenile Prosecutor’s Office. Eight others were between 18 and 19 years old, twenty-two in their 20s and 30s, and only one more of this age. In addition, according to police sources, five were Moroccan, one was Algerian, and the rest were Spanish.

In Valencia, the duty court also decreed provisional freedom for the six people arrested for the incidents that occurred on Friday night. All, between 21 and 27 years old, are under investigation in a case opened for crimes of assault on agents of authority. The detainees in Malaga and Murcia have also been released.

In Vitoria, moreover, the Ertzaintza asked for citizen collaboration in identifying the group of some 70 hooded men who threw stones and broke windows and doorways of homes, after a spontaneous gathering of some 300 people dissolved by the police on Saturday afternoon.

In addition, four people were arrested in Bilbao in several riots near Plaza Indautxu. Three other people were also arrested during the early hours of Monday morning in connection with the incidents in Arrasate, where five containers were burned.