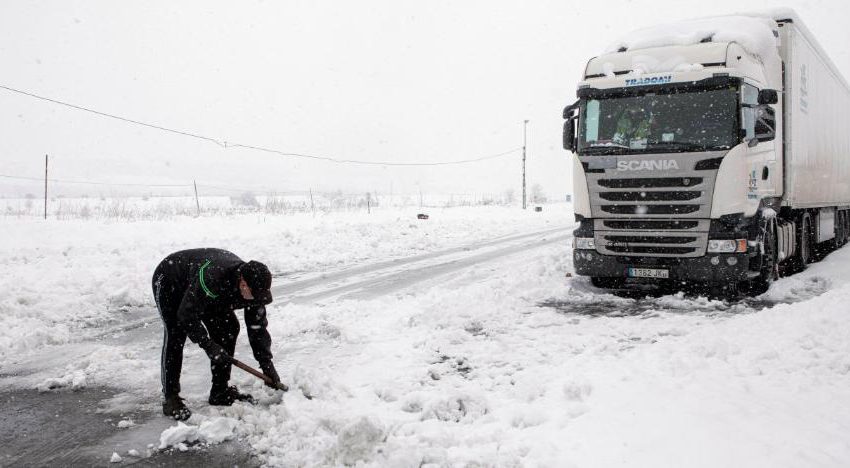 The scourge of Filomena in the form of snow put 16 regions of the Community at serious risk yesterday. During the early hours of the morning, rescues and aid to trapped truckers continued, both by firemen and the Guardia Civil, while inland villages were cut off by snowfalls that reached 40 centimetres in Morella.

Yesterday was a very tense day in which the Generalitat decreed the emergency by snowfall in situation 0 in almost half of the territory and the snow covered the peaks closest to the coast in points like Chiva or Sierra Calderona. This level means that the snowploughs and other emergency equipment worked ceaselessly to prevent the affected municipalities from being cut off. There are now 1,300 incidents due to the historic storm.

And in spite of the repeated ‘stay at home’ that since Friday was raised from the Government Delegation or Generalitat there was no lack of recklessness of those who decided to move to see the snow or play with the flakes.

In the port of La Carrasqueta, in Alicante, there were considerable traffic jams, drivers who ignored the request of the authorities to free up these passages for the snow brigades and snow ploughs. Following the worrying accumulation of vehicles in the well-known mountain pass, the Guardia Civil had to cut off access. The risk was, moreover, on the ice sheets.

Also recklessness on the part of the 14 tourists who went to the Sierra de Aitana and then had to be rescued by the Guardia Civil. In this area about 300 vehicles collapsed the CV-770 blocking a lane and complicating the work of the snow ploughs. The agents also had to warn and ask several people who had come to Barracas to play with the snow to leave. Rescue and rescue of drivers continued unabated throughout the day. According to the Government Delegation, the Civil Guard and the Red Cross assisted some 400 truck drivers who were trapped by roadblocks due to the intensity of the storm. Blankets and food were distributed among the truckers bagged in service areas of Requena, Camporrobles or Barracas, among other areas. At the close of this edition, the Government Delegation estimated that 285 truckers were trapped along the A-3 and another 160 in Segorbe.

More than 100 Guardia Civil patrols with 230 officers worked on these tasks. The agents also supplied emergency medicines to pharmacies in towns affected by the snowfall and guaranteed access to the Cofrentes nuclear power station. In the Alto Palancia area, some 30 truck drivers were held between Barracas and Viver, worried about when they would be able to resume their route, the cold or the supply.

Precisely to avoid supply problems, the Generalitat decided yesterday to provisionally lift the closure at 5 pm of the hotel industry because of the pandemic, but only for those bars and cafes near roads. And with truckers or emergency and maintenance teams as the only possible clientele, as highlighted by the Minister of Mobility, Arcadi Spain after visiting the Emergency Centre with the President of the Generalitat, Ximo Puig, and the Minister of Justice, Gabriela Bravo.

Despite the rescues and roadside assistance, Puig referred to a “reasonably quiet” night. He described the snowfall in the Comunitat as “important”, but without the collapses of the central part of the country. At the same time, he called for “absolute” prudence. “No one should go outside for leisure or to see the snow because it makes emergency work difficult. In response to questions from this newspaper, he said that until midday, there were no completely isolated municipalities, although there were “difficulties of access”. “There are indeed some villages that have not yet been reached,” he added.

The mayor of Portell de Morella, Alvaro Ferrer, for example, noted these problems due to heavy snowfall. “The difficulties in accessing the municipality are remarkable,” he lamented. “We are practically cut off from La Iglesuela del Cid, La Cuba, Cinctorres and Vilafranca through all the roads and highways”. For Ferrer, “in these complicated situations the precarious infrastructure we have is evident”. In addition to power cuts, he lamented “problems in telephone and internet coverage, when communications are more necessary than ever”.. In his opinion, “something is wrong with the policies against the depopulation of the peoples of the interior”.

As with the big snowfalls, the most serious problems were in the interior of Castellón. There, the firemen have been working relentlessly for several days. During Thursday and the last hours of Friday, fifty people were assisted by vehicles trapped by the snow.

Yesterday, 200 firemen were activated with one objective: to keep the snow off the roads. “It hasn’t stopped snowing and the priority is to keep the routes clear,” said a firefighter spokeswoman. The biggest difficulties were in Els Ports, Alcalaten and Alto Palancia. El Toro, for example, was momentarily isolated but the snow removal teams made their way. In the late afternoon, the firemen helped several vehicles blocked by the snow, in Morella, Vilafranca and Serratella.

And in the midst of the cold, trouble for the needy. Miqui Amador, coordinator of the group Invisibles that helps homeless people in Valencia, asked yesterday that the institutions provide places in hostels, shelters or, simply, places under cover. According to him, on Friday only five places in hostels were available and about twenty people were forced to sleep on the floor in the church of San Sebastian, opposite the Botanical Garden. Mensajeros por la Paz, Ca La Mare, Invisibles, Amigos de la Calle and Fundación Ayuda a una Familia got involved to get accommodation for those who sleep on the street but they couldn’t get a decent place. Yesterday the Archbishopric of Valencia offered a school pavilion.

Cáritas Valencia announced that it has doubled its places to attend to the homeless because of the storm. A new house has been given to the institution by the Archbishop and the opening hours of the San Esteban night centre have been extended. In addition, there are places arranged in two boarding houses in the city and a dozen beds in the CIDES centre in Aldaia so that the underprivileged can spend these days sheltered in the cold nights. According to the forecasts, a new cold wave is coming after the snowfall in the Comunitat.