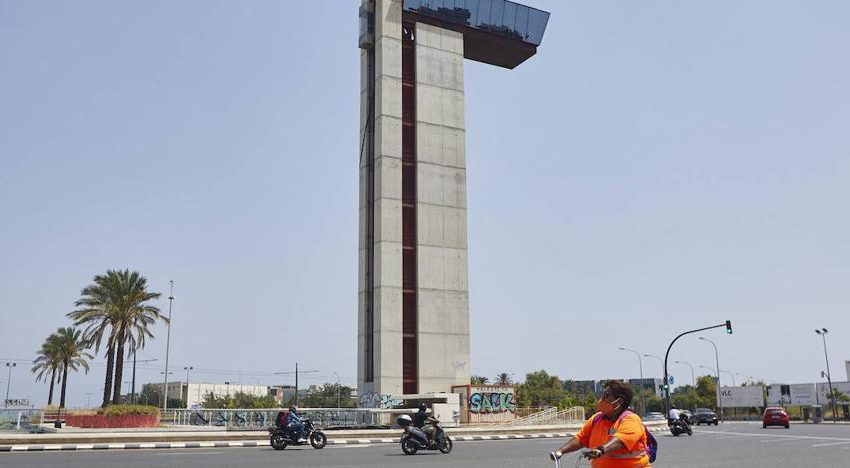 Hundreds of vehicles circulate around the Avinguda de Catalunya roundabout every day, and yet it is one of the busiest areas in the city. It is crowned by the Miramar Tower, which has been forgotten for more than a decade and it looks like a big dump, full of garbage and graffiti. A lookout point that could have been a symbol of the city but has been abandoned and splashed by the passage of time. Now, Valencia City Council could rescue this viewpoint and give it a new chance.

The Consistory is planning to fit out the space of the Miramar Tower and turn it into a circuit for the practice of parkour and other sports activities. This new use could be a solution to take advantage of the more than 7,000 square meters built that are currently in a state of disuse.

This has been transmitted by the Mayor Joan Ribó this morning, after a meeting with the representatives of the Parkour Valencia Association. The first mayor has pointed out that has spoken to the Road Demarcation “to seek solutions to the situation in which it is” the Miramar Tower and its surroundings.

Images of the state in which the Miramar Tower is located. / Ivan Arlandis

“Many millions of euros were spent there that have not been of any benefit. We are going to try to reverse that inheritance,” said Ribó. The end would be use the same tower as a climbing wall to “make the most of it”. In addition, accessibility would be facilitated and the pedestrian underpass would be closed.

The whole environment of the viewpoint would therefore be directed to the practice of urban leisure activities such as parkour, climbing, urban dance or calisthenics.

Joan Ribó has proposed as objectives “to give a use in a space until now lost for the citizenship, at the same time that the sport is promoted and an alternative of responsible and inclusive leisure is offered, especially for the young people”.

According to the mayor, these initiatives are “an alternative to practices that are sometimes unfairly applied to all young people, such as the bottle. Youth associationism, cooperation, self-improvement, constancy and companionship are also part of our youth, and the City Council wants to help intensify them”.