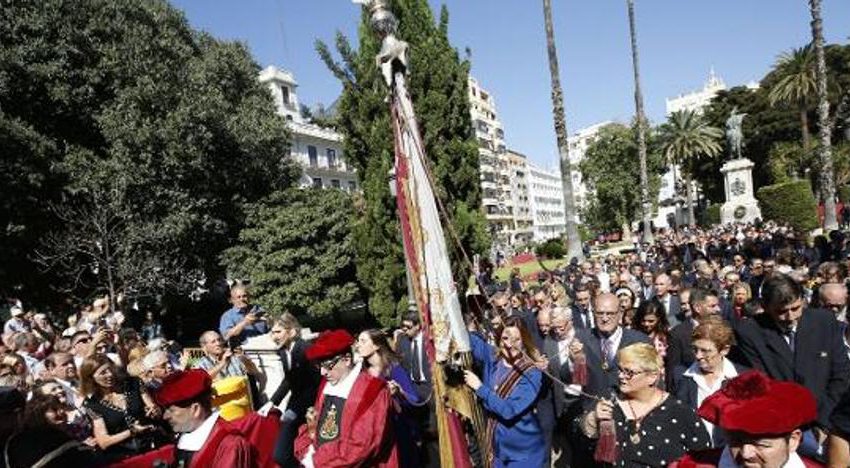 The mayor of Valencia, Joan RibóOn Tuesday, the Spanish government announced the cancellation of the civic procession that traditionally runs through some of the main streets of the city centre, with the Senyera, to commemorate October 9th, Day of the Comunitat Valenciana.

The Covid-19 pandemic has forced the suspension of this act for security reasons in order to “avoid crowding«. Instead, “Valencians will be able to go in procession to see the Senyera, with the corresponding security measures, in the Valencia City Council’s Crystal RoomThe first of these is a “tribute to a symbol that identifies us as a people, as a people of solidarity, a responsible people and a cooperative people”.

This was announced by the first mayor after a Extraordinary Meeting of Spokespersons which addressed how to celebrate the event this year. Also with the intention of avoiding large concentrations of people, it has advanced that there won’t be a big mascletà in the Town Hall Square, but the pyrotechnics will be moved and distributed: on the 8th the castles and fireworks, and on the 9th the mascletaes.

Ribó explained that on 9 October, at 12 noon, the Senyera will be removed from the Historical Museum and moved to the Crystal Room, accompanied by a representation of the Corporation and the timpani players. From 12.30 pm “all citizens are invited, with appropriate security measures, to enter your home to honor the Senyera” until 21.00, when it will return to the museum.

The mayor regretted that the celebration of October 9 “cannot take place in the conditions of other years because of the existence of the pandemic”, so in the Board of Spokespersons “we have found that a different October 9 has to be made.

In addition, other possibilities are being studied, such as extending the celebration to October 8 also moving the celebration of the Honors and Distinctions event to the morning of that day, and opening the City Hall during the afternoon so that citizens can already visit the Senyera”.

The Honors and Distinctions, which recognize the work of various individuals and entities, are awarded each year on the occasion of the commemoration of October 9.

Valencia City Council will recognize the work of the alderman of the Treasury, Ramon Vilarwho died this summer, with the title of honorary councilor posthumously, which will be given to his family. The journalists Vicente Vergara and María José Grimaldo (posthumously) and the Major’s defender, Jose PelegriThe entrepreneur Silvino Navarro (posthumously) and the composer Angels Lopez ArtigaCity’s Foster Kids.

PP and CS will pay tribute to Jaume I

From the PP, the spokesperson of the group, Maria Jose CataláHe has proposed that the Senyera be lowered through the balcony of the Town Hall “preserving that there is no concentration in the square”, as “it was possible in the act of homage to the victims of the Covid”, he has pointed out. However, the mayor has already ruled out this possibility.

In any case, for the ‘popular’ it will not be a “decaffeinated” celebration, Catalá said, since they will recover “the historical tradition of going to the Te Deum” and will make a “particular tribute to Jaume I” where the floral tribute is always made to him.

Citizens will also make an offering to Jaume I to “continue the tradition”, announced the spokesman of the Orange formation, Ferdinand Giner.

In addition, Giner has asked that the Senyera be exhibited “as many days as possible” in the Crystal Room “so that citizens can enjoy the Senyera and touch it, take pictures and be close” to it and that the act of Honors and Distinctions be made “as close as possible” to October 9, which will study the first mayor.

Finally, the Vox spokesman, Jose GosalbezHe noted that “it will not be a normal October 9 as we are accustomed and as our real Senyera deserves.