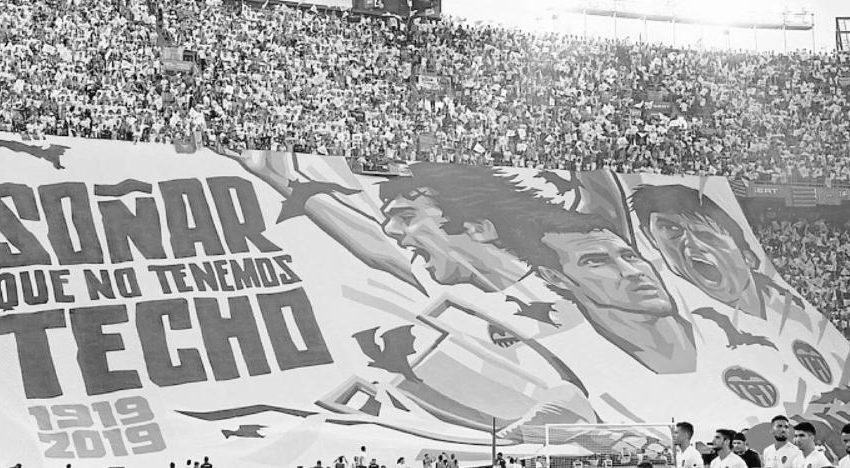 I- Cup champions. 25 May 2019. It was still a dark night when Jaume, hand in hand with his grandfather Javier, entered the North Station. There he met his friend Quico, who was also with his grandfather. They were all there. And the train left for Seville. To the Final!

The children, like the saint of Avila, were not living in themselves. Everything was new to them: the early morning, the euphoria, the flags, the songs. And, above all, the illusion of winning against Barça. Lunch in Seville. Coffee at the Alfonso XIII. And the countryside. It was hot, there were no taxis… well, in a buggy. Something that was also new for the grandparents.

We won. Valencia added a golden page to a beautiful, centuries-old story. Valencianism conquered Seville and the children, with a shaken heart, engraved in its memory what they will never forget.

2020 is here. The virus and the mother who gave birth to it. And the master and his courtiers began to rule. And they didn’t think there were things money couldn’t buy. Because they don’t sell. They’re extra commercium beef. They forgot that the old scars revert and become living wounds at the slightest blow. They also forgot that neither knockers, nor keys, nor locks can confine the memory of what we once were and want to be again. They forgot that in these lands 86 set the tone for what those who grow up with punishment can do. And it is being remembered by voices much more authoritative than mine, voices of people we love because they made us happy – Mario Alberto Kempes, Claramunt, Cañizares, Ayala, Subirats…

Under the protection of so much oblivion, he found shelter in an unspeakable management, both sportive and economic. And here the master and his people should have been a little more careful. It is the same with companies as with the Public Administration, which has powers, but it must place them at the service of the general interest – in this case the interest of society, which is Valencia CF – and cannot deviate from its power and use it for personal gain. The master can do many things… but there are things he cannot do. And I won’t give three quarters to the town crier.

In this 2020, Jaume and Quico do not understand anything. It has been a very hard year for them too. Because of the virus, because of the anxiety they experienced at school. And at home… And because of Valencia. They thought we were going to play in the European Cup, but… their cup champion has fallen apart. They don’t understand. Neither do the grown-ups.

III- Quo vadis Valencia? The Valencianistas fear for the future of their Valencia. Yes, Master, I say this with respect and without bitterness: the actions today are yours, the history is ours. And we want Jaume and Quico to continue writing it.

That’s why, for them, we have to react. Buy back what we should never have sold. Get hold of the wallet. Forget the taifas and walk together. Not to impute guilt, but knowing that an ounce of dignity will force some to remain silent forever. And entrust the government to those who have time to spare.

We must bequeath to Jaume and Quico, at least, what our elders bequeathed to us. If we don’t succeed, I won’t just cultivate the fallow lands of oblivion. I never did, because I neither love the lands of oblivion, nor do I intend to cure myself of my childhood and the world and the people I lived with. With my Miguel Hernández, I will try to revive the smell of a mother’s garden – football – which once belonged to everyone. A blessed garden that served many, said Albert Camus, a passionate footballer, as a drawbridge to escape from a fortress called misery. Many were those who, with their leadership in the classroom and on the football field, found compensation for the shortcomings with which life had gifted them. That, dear Jaume and dear Quico, is also football.