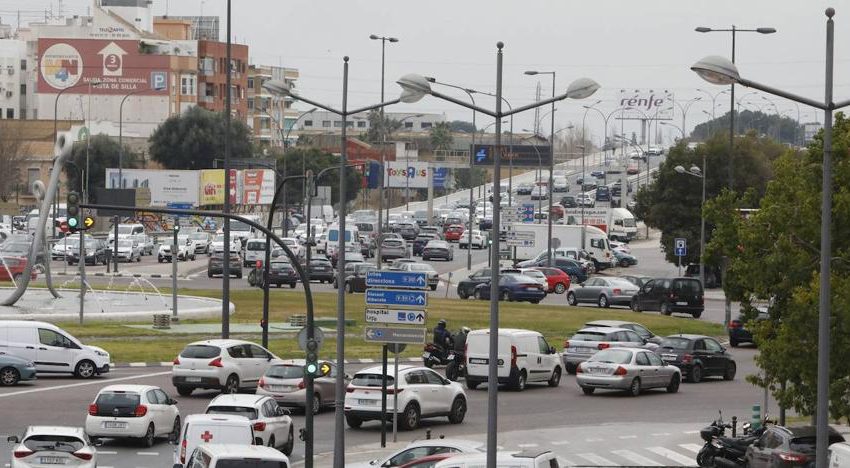 Valencia is closed again from 3 p.m. this Friday until 6 a.m. on Monday. For the second weekend, the capital is confined perimeter, but this time already has the experience and, unlike seven days ago, the exits of Valencia have not presented traffic problems until the closing time.. While at 13:00 the surrounding roads circulated normally, only an hour later the first traffic jams began on the V-30 and V-31, as well as the CV-36, the exit to the A-3 and the V-21.

On the Avinguda de Catalunya (V-21) there are three kilometres of traffic jams between Alboraya and Valencia on the way in.

On the Torrent exit (CV-36) at Picaña, there are another three kilometres of traffic jams in the direction of Valencia, the same as on the A-3 accesswhere there is one more.

The intersection of the by-pass with the Llíria motorway at the height of the Valencia Sports City also registers the first traffic jams.

The first traffic jams in Valencia, in Avenida del Cid.

The Cid Avenue and Tres Cruces Avenue have registered the first traffic jams due to the perimeter closure of Valencia a few minutes before the measure came into force this weekend at 3pm.

There are also problems in areas of Valencia as the Paseo de la Ciudadela by works, to be only one lane, in addition to Matías Perelló by cutting the Peris and Valero Avenue.

The controls will be reinforced on Sunday in the surroundings of Valencia Fair as it was the venue in Valencia for an election in Ecuador. In total, 10,000 agents participate in a device which in the case of the capital will be permanent in the major accesses, while in the secondary ones there will be random controls.

What to do and what not to do during the perimeter closure.

Most of the population, both in the 16 municipalities of more than 50,000 inhabitants that are confined and those of the rest of the localities, already know that you can not enter or leave under fines of 600 euros, unless access is properly justified. Whether for work reasons, care of a dependent relative or cases of shared custody, citizens must carry documentation proving that you can take any of the exceptions reflected in the DOGV.

Therefore, access to shopping centers or shops that are located within these localities will be vetoed for non-residents, as well as cinemas, theaters and other entertainment. Residents may go to these spaces but only until 18 hours while restrictions remain in force as announced by the president of the Generalitat, Ximo Puig, to try to flatten the curve of this third wave of the pandemic of Covid-19, which has caused the death of residents of 121 municipalities and contagions in 382 other locations.

But the same thing happens the other way around, residents of the perimetered cities will not be able to go to shopping centers or shows outside the city limits, nor will they be able to go out for sports. It should be recalled that in urban areas, from 10 to 19 hours, it is mandatory to wear a mask for physical activities. In the same way, you can not go to parks and other outdoor places outside the borders, such as the beach. In Valencia, for example, will have to stop at the end of the promenade of the Malva-rosa not to continue along the beach of Alboraya.

As last week, the controls will be located at the exits and entrances to the city until 10 p.m., when it begins the general curfew. Likewise, both the local and regional police have planned controls at all access points, whether by road, train or metro.

Going out to eat is another of the activities that will have to be postponed for the moment. Yes it is authorized the order of food delivery within the city onlybut the catering establishments are still closed for the consumer. In the next few days, snacks and appetizers should be eaten at home with the people who live with them.

This second weekend of closure is expected a meteorological worsening that will help to cope with the situation. Valencia will record this Friday a decrease in maximum temperatures while the rains could arrive on Saturday to the Comunitat and on Sunday there will also be clouds and local decreases in temperatures, according to the prediction of the State Meteorological Agency (Aemet).